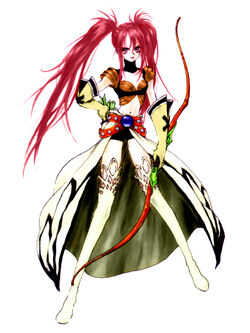 Around 1,000 years prior to the events of Tales of Destiny, a Lens-infused comet collided with the planet, producing massive amounts of dust that clouded the atmosphere. This event led to an ice age that threatened humankind until humans were able to use the Lens from the comet to create a floating continent known as the Aethersphere. Only the upper class was allowed to migrate to the continent, however, which caused intense strife and eventually led to a conflict known as the Aeth'er Wars. It was during this time that the people of the Aethersphere became known as the Aeth'er race, while those left behind came to be known as the Er'ther race. While no physical anomalies arose between the two populaces, labeling the groups as races allowed for a stronger distinction, as the elitism of the Aetherian people had grown severe.

Kronos, a powerful Aetherian king, ruled over the Aethersphere and used the mysterious Eye of Atamoni to construct the landmass, which threatened to cover the Er'ther Lands, eradicating its population in the process. The Eye of Atamoni allowed him to form large, technologically-advanced aerial cities and the aeropolis capital of Dycroft, which yielded the superweapon Belcrant. This extremely large, sword-shaped weapon was used to strike down any who opposed the Aetherians, who deemed themselves "celestial people". They were notorious for disposing of their waste upon the surface world, namely the desert region of Calvalese.

Eventually, a group of Aetherian scientists became disgusted enough with their people's elitist behavior that they descended to the surface world in order to aid the Er'ther people in defeating the Aetherians. One of these scientists, Harold Berselius, created sentient swords known as Swordians, which a team of combatants, later called Swordian Masters, used to infiltrate Dycroft and defeat Kronos, ending the war. Afterward, the Er'ther people sunk the Aethersphere and its aerial cities into the depths of the ocean and exiled the survivors of the Aeth'er race to Calvalese, where they were to live with the harsh conditions and aftereffects of their wastefulness.

In modern times, these events have long been forgotten by the current populace, though the descendants of the Er'ther people comprise a vast majority of the population, while the descendants of the Aetherians are restricted to Calvalese and remain hostile toward outsiders. Unlike much of the modern world, Calvalese has no government or ruler, and most people in the region do not follow religion or believe in a god.

v • e • d
Lore for Tales of Destiny and Destiny 2
Community content is available under CC-BY-SA unless otherwise noted.
Advertisement