Agarte Lindblum (アガーテ・リンドブロム, Agaate Rindoburomu?) is a central character in Tales of Rebirth. She is the daughter of the former Calegian King, Ladras Lindblum, and ascends to the throne after his untimely death, a day recognized as the Dusk of Ladras. Agarte's actions early in the story set much of the game's plot in motion, allowing for subsequent events and ulterior motives to unravel as the story progresses.

At some point prior to the beginning of the story, Agarte, in her new position of power, commands the King's Shield to gather the most beautiful Huma girl from all appropriate cities in the kingdom. When Saleh and Tohma of the Four Stars invade Sulz and take Claire Bennett with them, Veigue Lungberg and his new companions, Mao and Eugene Gallardo, embark on a journey to bring Claire back, as well as determine a reason for Agarte's actions. Agarte is first seen in Susie Quess's flashback, in which she attempts something that leaves Susie unconscious. Although it is, at first, unclear what Agarte tries to do to Susie, the flashback indicates that it was unsuccessful.

Agarte is shown again during Claire's meeting with her, in which Agarte determines that Claire is a suitable host for her plans. When the protagonists manage to infiltrate Calegia Castle, Agarte and her adviser, Zilva Madigan, find them, and Agarte grants them an audience at Eugene's behest. During this meeting in the throne room, Agarte explains how there is an ancient Calegian legend that mentions a great war and Divine King, whom shall be reborn when the moon achieves a certain status. She then tells of how Six Saints came into conflict with the Divine King, waging war with him and sealing him away.

Agarte makes it clear that her purpose is to revive the Divine King so that she and her country may benefit from such power. When the group asks how Agarte plans on summoning such a being, she explains that through the Force of Moon, which manifests itself solely within members of the royal family, she shall call forth such power and deliver Calegia. Veigue demands to know why Claire is needed for such a ritual, but Agarte falls into a trance-like state, claiming that Claire shall be her hope. Zilva then calls upon the guards to seize the group, and they are taken to Balka Prison.

After the group escapes from Balka Prison, they quickly make their way back to the castle in order to rescue Claire. At the ritual dais that sits at the top of the castle, Agarte prepares for the ceremony by chanting to the Divine King. Agarte's body is bathed in light, and Claire is imprisoned in a glowing moon, which prompts Veigue to force his way into the ceremony. Zilva has him seized, but he is forced to witness Agarte envelop herself in the moon only to lose control of her power and scream for Zilva's help. The Divine King then appears, introducing himself as Geyorkias, King of the Sacred Beasts.

After fighting Geyorkias and seemingly managing to overcome him, the group finds that Agarte is missing, presumably dead, and Claire is unconscious nearby. It is later revealed that Agarte managed to swap bodies with Claire, though Agarte keeps this information secret throughout a large portion of the story. As Claire, Agarte behaves strangely, surprised that the ritual was semi-successful. She accompanies Veigue and the others as they attempt to cure Eugene of his troubled heart. At some point, Agarte manages to sneak away from the group and make her way to Balka, only to be stopped at the front of Calegia Castle because Milhaust Selkirk, who partially blames the group for Agarte's death, sends her away.

Agarte returns unnoticed but is left with few options other than stay with the group in the meantime. She accompanies them during the Sacred Beast trials, speaking rarely but offering insight when the situation calls for it. She is later held captive in Kyogen, where she discovers that Claire, who is in Agarte's body, is being held in the next room. Although Agarte is rescued by the group, Claire is taken away, having been sold to the mayor of Belsas, Scarab, who is intrigued by Claire's remarkable resemblance to Queen Agarte, ignorant of the fact that Claire is occupying Agarte's body. When the group arrives in Belsas, a series of events unravel the truth behind the day of the crowning ceremony.

While the group is resting at Belsas's local inn, Veigue and Agarte have a private conversation concerning the recent events that have taken place. Although Veigue has been suspicious of "Claire" due to her atypical behavior, as well as Zapie's reluctance to be near her, he remains conflicted regarding what he truly believes. In the midst of their conversation, Veigue ponders how Agarte could have done such a thing, prompting "Claire" to defend Agarte by emphasizing her desire to do what she felt was best for her country. As the conversation progresses, Agarte, surprised to hear Veigue say that Milhaust was crying over her death, acknowledges that he felt the difference between them was too great. Veigue then realizes that Agarte loved Milhaust, but he could not reciprocate her feelings due to their difference in race.

Later, when the real Claire is about to be executed by Scarab, Veigue discovers the truth of the swapped bodies, though he is unable to process it at the time. After Claire is saved, Agarte explains that she swapped bodies with Claire using her Force of Moon, spurring the events that followed. Ashamed and unable to explain further, she flees, leaving the group with the real Claire. During her time away from the group, Agarte witnesses the effects of the "impression", as it is called, which is causing racial strife across the map. It is also during this time that she witnesses Zilva's ascension to power and contempt for Huma that is provoking disputes around the world. She later rescues Veigue at Etoray Bridge, where he collapsed after a fight with Milhaust.

In Minal, Agarte explains that she can no longer make use of her Force, though she accompanies the group regardless. When the group visits Sulz, Agarte pretends to be Claire for Claire's parents' sake, though they recognize that Agarte is not their daughter. In spite of this, Veigue assures them that he will return the real Claire to them. Agarte later accompanies the group to Mount Sovereign, where Geyorkias's body is said to sleep. Deep within Mount Sovereign, the group encounters Zilva and learns of her role behind the scenes of the plot, how she manipulated Agarte into performing the ceremony and summoning Geyorkias.

After the group defeats Yuris in its realm, Agarte uses her Force of Moon to summon Geyorkias once more and rid of Yuris's "evil consciousness" so that the world may be saved. The ritual is a success, and Geyorkias purges Yuris and its consciousness from the world, albeit warning the group that Yuris shall return if humanity should stray down the wrong path again. Agarte and Claire are returned to their own bodies as a result of the ritual, though Agarte collapses due to the exertion of her Force. In Milhaust's arms, she explains that, though she knew what would become of the world because of what she did, she desired the body of a Huma above all else. She leaves the country in Milhaust's care before confessing that she has always loved him and dying in his arms. In the game's credits, her necklace is pictured sitting near Milhaust's helmet on the throne in Balka Castle.

Agarte is a beautiful Gajuma woman with feline features that mirror her father's lion-like resemblance. She has crystal-blue hair and green eyes. Her skin is fair, and her delicate attire is extravagant yet modestly elegant. She wears a large, decorated white dress adorned with a large, pink rose on its chest, as well as a luminescent, bridal-like veil that follows peacefully down her back. Her petite crown rests atop her head, surrounded by a large, white bow that compliments her dress.

Personality-wise, Agarte is refined and moderately reserved. Due to her naive and trusting nature, she is easily manipulated by Zilva, whom helped raised her, and blinded by her love for Milhaust, whom she grew up with. Her desire for a Huma body stems from Milhaust's reluctance to reciprocate her feelings due to the difference in race, so she seeks to become desirable for his sake rather than considering her own feelings. 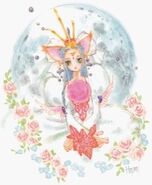