Ange Serena (アンジュ・セレーナ, Anju Sereena?) is one of the protagonists in Tales of Innocence. She works at a sanctuary in the city of Naohs. Possessing powers of healing, Ange is considered a "holy woman" in the sanctuary and has gained popularity because of this. She is the reincarnation of Orifiel.

As a "holy woman", Ange dresses as a priestess, wearing a white robe, a pair of white high-heels, and a red pearl necklace. She is a woman skillful in terms of words and political matters within society, which is why she is excellent at negotiating. She is very concerned about her weight and is constantly on a diet. Despite only being 115 pounds, she is oddly considered overweight by the rest of the team and is teased for it constantly.

Ange's fighting style is based on the Thief class from the Radiant Mythology series of games. She is capable of stealing items from enemies and delivering fast attacks. She also possesses a vast amount of healing, support, and Light-elemental spells, such as Big Bang and Revitalize.

Ange appears in Tales of the World: Radiant Mythology 3, both as the leader of the Ad Libitum guild and a playable character. Ange expresses some interest in Rocksprings, the butler of Kanonno Grassvalley. During the main story, Ange, Jade Curtiss, and the Protagonist are given the task to investigate abnormal activities inside the Almanac Ruins. At the entrance, they hear two members of the group known as the "Servants of the Dawn" talking about the Descender they discovered within the ruins, who is seen as a symbol of their worship. As the group follows them, they are caught by two more members exhibiting their newly found abilities, and the group is forced into a fight because the cultists assume the group is there to interfere with their plan.

As they are defeated, a red gas engulfs them, transmutating the cultists into crystallized monsters. They then withdraw deeper into the ruins to their Descender. As the investigation continues, the group finds the hiding place of the Descender named Lazaris, and they discover that her intentions are to revert Luminatia to her own world. During one scene in the game, Rutee Katrea and Norma Beatty discover a map that leads to a treasure chest inside the Brownie Mines. Interested in their plan, Ange joins their group and makes a request for the Protagonist to come with them as their escort. When they locate the chest, they find nothing but regular things inside, and the group believes that their efforts were wasted. But unbeknownst to them, a time capsule belonging to Arche Klein was also hidden within the mines.

In Tales of Crestoria, Ange is a sanctess working at an orphanage. She first appears in the limited quest "Intertwining Journeys". During the quest, Ange comes across a knight arguing with two girls, and tells the knight that the girls were with her. She takes the girls to an inn, and they introduce themselves as Rubia Natwick and Misella. Misella states that she does not have any intent of becoming a sanctess, as she was only following Ange's lead, but she would not mind helping out. After killing a cluster of monsters due to the growing population becoming a threat, the girls camp for the night. During dinner, Misella claims that she came with a boy named Kanata. They were with a group but got separated the day prior.

The next morning, the girls wander town to help out, such as giving medicine to a sick widow, feeding the orphans under Ange's care, and helping a boy find a lost friend in a cave. Suddenly, the soldier from the day prior returns with backup, informing Rubia that Misella is a transgressor. Misella then breaks through the guards and runs off. Rubia tries to follow her, only for Misella to tell her to stay out of her way. When Ange arrives, the guards accuse her of housing a transgressor. The villagers respond by yelling at the guards to leave Ange alone.

During their time alone at an inn, Ange admits to Rubia that she knew Misella was a transgressor, but wanted Misella herself to admit it first. Ange believes Misella only attacked Rubia to keep her safe. Rubia tells Ange what Misella told her the night prior. Before going to sleep, Misella asked Rubia whether or not she would broadcast the vision of someone accidentally killing an innocent person in order to save someone else. Rubia said she would, because all crimes needed to be answered for, no matter what the reason. Rubia realizes that Misella was referring to what happened to her. Ange states that she would have encouraged Misella to find her atonement, but she believes that Misella has reconciled with her crime. Ange decides to aid Misella in her escape so that she may find her atonement, because the vision orb system is far from perfect. Spurred on by Ange's words, Rubia helps out by creating a smoke screen for Misella to escape through the guards. Ange and Rubia then take Misella to the cave where they rescued a young boy, as the boy said he found another way out through the cave.

Skit image for Tales of Innocence. 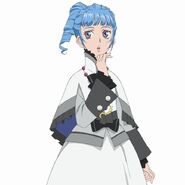 Cut-in image for Kouyoku Seidankou in Tales of Innocence R.

Cut-in image for Houyoku Shitenshou in Tales of Innocence R.