Aselia Wiki
Register
Don't have an account?
Sign In
Advertisement
in: Anise Tatlin, Tales of the Abyss characters, Protagonists
English

Anise Tatlin (アニス・タトリン, Anisu Tatorin?) is one of the protagonists and a Fon Master Guardian in Tales of the Abyss.

The true reason Anise is so greedy is because her parents, Oliver Tatlin and Pamela Tatlin, got themselves deep in debt. Due to their gullibility, they did not notice that they were being conned until most of their money was gone. Grand Maestro Mohs saw this and offered to take them out of debt, as long as they worked for him, so Anise could not refuse his demands, especially after Mohs took her parents hostage.

This eventually led to Anise spying on the party, and giving away their location so that the God-Generals could attack them. Anise later betrayed them, taking Ion away to Mohs so Ion could read the Planetary Score. He died after reading this, making Anise feel responsible for his death. She makes amends with the party and rejoins the group, believing it to be what Ion would have wanted. When the party encounters Arietta in the Cheagle Woods, Anise fights her in a duel and wins. As Arietta dies, Anise mourns for her despite the animosity between the two.

Later in the story, when the party journeys to the Absorption Gate for the second time, Anise rescues a forgotten replica of Ion who was forced to read part of the Score that Mohs had obtained from Van. Despite having read part of the Score, this Ion replica survives and is brought back to Daath with the party. They decided to make this new replica the replacement for Ion, and he grows quite fond of Anise. When deciding on what to name the replica since the idea of "Ion" being alive would cause confusion, Anise gives the new Ion the name "Florian", making the Ion replica very happy. She promises to visit him more when the battle is over before the party goes on to confront Van at Eldrant.

In a manga sidestory titled "Dance Gaiden", Anise's secretive and mature nature is revealed to have stemmed from being bullied by a group of older female Oracle Knights out of jealousy for her position as Fon Master Guardian.

As one of the youngest members in the party, Anise is a girl of an average size with slightly tanned skin, brown eyes, and short black hair in the style of pigtails. She wears a long-sleeved pink mini-dress that bares her shoulders and has white lines at the center of the mini-dress to the base. The sleeves of her mini-dress are a shade of violet, and the remainder of her hands are covered in white gloves. Accompanying her attire is a lighter pink mantle adorned with symmetric patterns, and her stuffed doll Tokunaga hangs on her shoulders. Finally, she wears white stockings, which are accompanied with a set of brown shoes.

Anise is often shown as a very outgoing girl. Her behavior is usually cheerful and childish, and all displeasing remarks are met with her trademark moan. At times she is openly violent and ruthless, such as an incident when she screams she will kill the "bastards" on the Tartarus after falling out of a window. However, she is careful not to show this side of her personality around Luke fon Fabre or Jade Curtiss. Underneath that giggly exterior, Anise is undeniably clever. She has a knack for taking advantage of people, from blackmailing Tear Grants into buying her cake after spotting the Melodist with a stuffed doll, to teasing the gynophobic Guy Cecil into submission. She is even able to convince Natalia Luzu Kimlasca-Lanvaldear that Van Grants can shoot lasers from his eyebrows, and she constantly teases Luke when she is not attempting to become his future bride.

But aside from the teasing, Anise proves to be remarkably mature for her age and even earns the trust of the cynical and unreadable Jade. She is precocious and surprisingly knowledgeable about the world, perhaps because she has seen the worst of it. But Anise is not one to reveal if she is sad or suffering. Instead, she puts on a resolute or cheerful front to cover up her true feelings. She is also very flirtatious, as a result of her family's financial problems. This causes her to latch onto any rich men she might encounter, especially Luke after discovering that he is the son of a duke. However, eventually she decides to give up on marrying into money and instead, aim to become the first female Fon Master to reform the Order to the way Ion wanted it, as a religion that saves people rather than controlling them.

In battle, Anise is a force to be reckoned with due to her high physical defense and access to both melee and magical forms of attack. While she likes to claim that she is a delicate maiden who needs protection, Anise is more than capable of beating enemies to a pulp. Instead of fighting on foot, she rides her automated doll, Tokunaga, which she commands through her skills as a puppeteer to attack enemies using an unarmed martial style. However, compared to other characters, Anise is more susceptible to being damaged by area-based attacks due to Tokunaga's large size and decreased evasive abilities.

Nevertheless, Anise receives a higher HP progression and greater defense, allowing her to withstand extended enemy aggression. Her attack speed is also slower compared to other party members, but this enables her to keep enemies staggered while she performs her combos, allowing other characters to benefit from a less restrictive recovery period before resuming their own combos. She is also capable of casting fonic artes, mostly focused on the Light and Dark elements. Through these spells, Anise can create Light and Dark FOF Circles, which can enable elemental FOF Changes of all elements. While Anise can equip maces or rods to augment her physical and magical damage abilities, she only uses these weapons as part of her somatic spellcasting actions, completely relying on Tokunaga to deal physical damage.

Anise is available as a support arte using Sousenga and X-BUSTER, an arte normally accessible only when she's equipping the "Artificial Life Form" doll accessory in the original game.

Anise appears in Tales of the World: Radiant Mythology 2 as a playable character, fighting on the back of Tokunaga. Anise arrives on the Van Eltia after Paneer alerts Jade that a someone who knows him has arrived on the ship. Anise explains to Jade the information she got while out and decides to stay on the ship. When the player chooses a male character she will often fantasizes about her and the Protagonist being together. Halfway through the game the player is forced a Dark Character of Anise born of her sorrow and grief. The weapon Anise uses throughout the game is the "Fonic Mace".

Anise is a unlockable character in Tales of VS. She fights alongside Jade in his story mode.

Anise appears in Tales of the World: Radiant Mythology 3 as a playable character. Although she does not have a specific role in the story, she is recruitable after completing Jade's personal quest, in which he is searching for her. She can be located in the second area of Sacred Mountain Absol during the last mission with Veigue Lungberg and Spada Belforma. 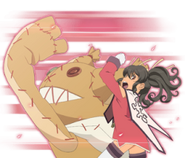 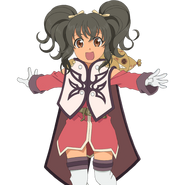