Aqua (アクア, Akua?) is an antagonist in Tales of Symphonia: Dawn of the New World. She is the Centurion of Water, and therefore can control monsters of the water element. Like Richter Abend, she hopes to regain and destroy Ratatosk's core. Although she tolerates Emil Castagnier as long as he helps Richter, she is abrasive and fond of yelling at Tenebrae, a fellow Centurion.

Before the events of the story, two scientists from Sybak, Aster and Richter, discovered and woke Aqua at her altar. They told her that they had formulated a hypothesis that monsters were the ones who distributed the world's mana. She offered to guide Richter and Aster to Ratatosk's resting place in the Ginnungagap, so that they could persuade him to restore the balance of mana. Unfortunately, Ratatosk's rage at human and elven kind rendered him unwilling to listen, and the visit culminated with Ratatosk murdering Aster. At this point, Aqua lost all faith in Ratatosk and sided with Richter instead. After Richter had killed Ratatosk, Aqua told Richter to destroy the core. However, Tenebrae managed to steal the core and escape. Aqua decided to follow Richter out of the Ginnungagap to help him find and destroy Ratatosk's core and find a way to help Aster. 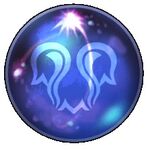 Aqua and Emil first meet in the Lake Sinoa Cave beside Richter when she calls out to Richter's side. Later, when Emil tries to go against Richter, he summons Aqua and tells her to set a monster to drive Emil away. After Emil makes a pact with Ratatosk, however, the monster is defeated, resulting in Aqua weakening in the progress. Afterward, when Emil finds an injured Richter, he goes back to Aqua and asks her to help him. She agrees, telling him that although he is not as cool as Richter, he is acceptable.

Aqua is not seen again until Richter's sidequest in Asgard. During the quest, she almost reveals the truth about Emil's nature, but is silenced by Tenebrae. After the quest is over, she invites Emil to Triet to help Richter again. On this second quest, she is surprised along with the others when Richter laughs and says that she has never heard him do so before. Later in the Temple of Ice, she is seen helping Richter when he attempts once again to kill Marta Lualdi with a stronger monster, but is, like Richter, fooled by the fake Marta of Sheena Fujibayashi's creation. Aqua joins Emil and Richter on a third and final sidequest to obtain the "Deep Sea Scroll". Like always, she is short-tempered and yells at Emil and Tenebrae often. At this point, both she and Richter suspect that Emil is in fact Ratatosk.

In the final chapter, Aqua blocks the party from proceeding in the Ginnungagap and reveals Richter's plan on reviving Aster with the power of the demonic realm. She transforms into the Ladon and attacks the party. After her defeat, she is mortally injured, as she actually took the form of a monster and fought, rather than simply controlling one. She transforms into a core and apologizes to Richter for only being able to buy him a little more time. Tenebrae realizes that the reason she helped Richter was because she fell in love with him.

Emil declines to hatch her immediately after her defeat, saying that it would be cruel, but in reality, he needs it unhatched for his final plan at the gateway to Niflheim. Only near the end of the game does he finally hatch Aqua's core and begin to restore the balance of the world. Aqua, together with Tenebrae and Verius, tells Emil to live the life he took away from Aster, saying that she will help in the task of making mana no longer necessary for the world, and thereafter use the remaining mana to make a seal to the door of Niflheim.

Aqua is very hot-tempered, refusing to take any kind of offense to her. She seems to only care for Richter and does nothing for anybody else. She often argues with Tenebrae, though mostly she is the one arguing. At the end of the story, Aqua shows to be different from the other Centurions, as she is capable of love. According to Tenebrae, this is a result of being influenced by Richter's hard conviction.

As a Centurion, Aqua is incapable of fighting herself, but can control monsters of the Water element to fight in battle for her. She can order all kind of monsters, from small forms to giant sea dragons. As seen in the last battle, she can transform herself into a large water monster to fight, but this costs her so much energy that she transforms back into her core state when she loses in the Ginnungagap.