Aselia Wiki
Register
Don't have an account?
Sign In
Advertisement
in: Arietta, Tales of the Abyss characters, Major Antagonists
English

Arietta the Wild (妖獣のアリエッタ, Yojuu no Arietta?, "Arietta the Beast") is a major antagonist and God-General in Tales of the Abyss. She is one of the only God-Generals not known to operate under an assumed name, as well as the only one without a past she wishes to conceal. She is the 3rd Division Commander within the Oracle Knights.

Arietta was born in N.D. 2002 on the Isle of Feres, the sister island of Hod. After the destruction of Hod and the subsequent tidal wave that destroyed the Isle of Feres, she lost her parents and was raised by ligers, eventually learning to communicate with them and other monsters. Arietta lived this way for some time until Van Grants found and removed her from this feral life. When she was seven, Van introduced her to Fon Master Ion, the replica Ion's predecessor, and two years later, in N.D. 2011, she became his Fon Master Guardian. During this time, Arietta developed an affectionate relationship with Ion, who assisted Van in teaching Arietta to read, write, and talk.

When the original Ion died in N.D. 2015, Arietta was demoted to conceal his death, which negatively affected Arietta, and the replica Ion took his place, whereas Anise Tatlin succeeded Arietta's role. From this point forward, Arietta believes the replica Ion is the original, and she harbors a hatred toward Anise for replacing her. The information of the original Ion's death was kept as a secret from Arietta by Van and the other God-Generals because they believed she would kill herself if she knew the truth. Having nowhere to go following the destruction of her home and demotion from Fon Master Guardian, Arietta joined Van's six God-Generals. Arietta's ability to communicate and control monsters classifies her as a useful subordinate to Van.

Arietta is first seen aboard the Tartarus, having had her monsters seize the dreadnought. During a skirmish outside the ship, Arietta comes to Legretta's aid and beckons for Ion to return to her only to be forced back into the ship when negotiations become too hostile and the God-Generals are left with little choice. Arietta first confronts the group at the Kaitzur Naval Port, where she is acting against Van's orders and following Asch's instead.

Asch persuades Arietta to enact revenge upon the group for the death of her "mommy", the Liger Queen. She has her monsters attack the port and damage the ship the group intends to take to Baticul. She also takes the chief engineer hostage, instructing the group to meet her at Choral Castle in exchange for the engineer's life. There, she vows revenge for the death of the Liger Queen and again beckons for Ion to return to her before engaging the group in battle and losing. Van then arrives and detains Arietta.

Arietta is again encountered on Mt. Roneal, where she fights alongside Largo and Legretta against the group. Upon defeat, the three God-Generals are caught in the effects of the battle, an avalanche, and are all presumed to be dead. It is later revealed that they were saved by Arietta's monsters. Arietta later assists the group in attempting to prevent Mohs, having been assisted by Anise, from having Ion read the Seventh Fonstone, which would end his life due to his condition. Following Ion's death at Mt. Zaleho, Arietta blames Anise and challenges her to a duel to the death.

When the group finds Arietta at the newly-replicated Isle of Feres, now Arietta's private boat, she informs Anise that the duel shall be held at the Cheagle Woods, where the Liger Queen was slain. Arietta and her monsters fight Anise and the rest of the group but lose. Arietta dies without realizing the Ion she sought after was not the same one for whom she so deeply cared. As Anise mourns for Arietta, Largo, who was serving as the mediator of the duel, carries Arietta's body away, telling Anise not to insult Arietta by crying over her. He also vows that the next time he meets the group, he will avenge Arietta's death.

In spite of her age, Arietta's appearance and personality reflect that of a young girl. This is attributed to her having being raised by ligers, resulting in stunted growth development and lack of social interaction. Arietta wears a black dress and boots, trimmed in pink, as well as a small, similarly-styled hat with the symbol of the Order of Lorelei on it. She has long, pink hair and carries a doll that accompanies her in battle. Her outfit later changes, replacing the majority of the black clothing with white, while still retaining the pink accents. In a flashback in the Tales of the Abyss anime, Arietta is shown in her Fon Master Guardian attire, which is identical to her other outfits, apart from being entirely pink.

Arietta is very timid, shy, and naive, though believes in her personal ideals strongly. She despises Anise for "taking Ion away" from her, which, due to her lack of knowledge that the Ion she cared for is dead, makes her hatred largely unnecessary. Her determination in obtaining vengeance for the death of her "mommy", the Liger Queen, drives her to fulfill Van's wishes. While she is deeply devoted to Van, she cares more for Ion, even betraying the other God-Generals in order to save his replica. Arietta is also very emotional, often allowing her feelings to inhibit her priorities. She acts on sentimentality rather than reason, and her demeanor is childlike, which is somewhat characterized by her feral childhood.

Arietta fights accompanied by two monsters, a liger and hraesvelgr. However, Arietta is largely a supportive fonist, casting spells such as Barrier and Sharpness to increase the power of her monster companions. She specializes in Dark-elemental fonic artes and shares her repertoire of offensive spells with Anise herself, such as Negative Gate and Bloody Howling, in addition to their shared Light-elemental spell, Limited. Arietta carries a doll into battle, which she raises while casting spells, though it does not serve any visible purpose. She is also able to cast fonic artes that have been altered by the effects of an FOF Circle to create spells such as Aqua Protection, Blaze Emitter, Crimson Riot, and Maelstrom. Arietta has access to two mystic artes: Evil Light and Big Bang. 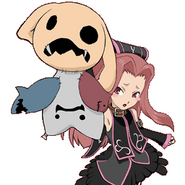 First cut-in image for Evil Light in Tales of the Abyss. 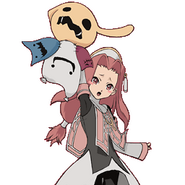 Second cut-in image for Evil Light in Tales of the Abyss.