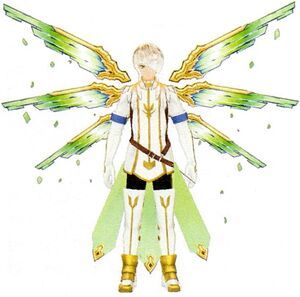 "Kamui" redirects here. For the mystic arte used by Chester Burklight in Tales of VS., see Kamui (arte).

Only the characters Sorey and Rose can perform armatization, which fuses either of them with a chosen seraph partner to produce a powerful hybrid form called the armatus. This form can perform hidden and seraphic artes indicative of the element the seraph represents and loses access to martial artes. While in this form, the stats for the human and seraph characters are combined, and they gain special abilities unique to the fusion: the character can wield a large sword and employ fire-based magic (Lailah), shoot water arrows using a bow (Mikleo), use stone fists and summon stone pillars (Edna), or gain blade-like wings and summon whirlwinds (Dezel/Zaveid).

A character can swap out their seraph partners while not in this form, and both characters capable of armatization can be in this form at the same time. If the human character is knocked out, activating armatization will resurrect them if their current seraph partner is still active. When the fusion ends, the combined form's BG is split evenly between the participants.

With the story, armatization is the Shepherd's power that they can share with Squires who have high enough resonance. The resulting armatus is based on the Divine Artifact (神器?) used to form the pact. The human needs to call out the seraph's true name to activate it, and as seraphim guard their true names, it requires a bond of trust. Sorey takes a while to learn how to activate the armatus at will, as he is able to enter it but has difficulty leaving it on its first use. Rose is able to pick up armatization easily because Dezel has spent years periodically possessing her body, leaving her susceptible to spiritual influences. Heldalf is able to armatize with Maotelus during his final confrontation with the group.

In Tales of Berseria, armatization abides by the same principles as its sequel, though it is relatively new in this game, having been developed by Melchior Mayvin, who copied and studied the design of the amplification artifact known as Siegfried. He was able to deduce the potential of the armatus via those possessing a strong enough resonance to activate and wield it. Melchior, a legate of the Abbey, thereafter employs the experimental technique to where even exorcist orderlies use it in battle, though only Earth- and Water-elemental variants. Oscar Dragonia introduces the concept to the protagonists in the Baird Marsh, fusing with his tethered Wind malak to face the group in battle. Melchior himself takes advantage of the Water armatus in his fight against the protagonists on Mount Killaraus. Finally, Artorius Collbrande performs armatization with Innominat, fusing into a powerful, non-elemental armatus with Light properties.

In a skit near the end of the game, two freed malakhim reveal their intention of further developing armatization to the protagonists in order to better deal with future problems. In addition, they mention that armatization, which Melchior developed, was created so that the fusion was one-sided, thereby making it to where exorcist could exploit the malak's power. As a result, they intend to alter it so that the human and malak can armatize with mutual awareness and consent, as a way to bring about coexistence between humans and malakhim.

In Tales of Zestiria the X, the armatus is an arte initially available to Sorey, and he frequently armatizes with Lailah and Mikleo to quell malevolence. In episode 22, "The Ideal World", Rose and Alisha Diphda attempt to armatize with Dezel and Edna, respectively, but the power is too great and the two collapse. In episode 23, "The Land to the North", Rose and Alisha successfully perform Wind and Earth armati as a means of helping Sorey quell dragons as they travel across the north to Heldalf. In episode 24, "The Answer We Come Upon", Sorey armatizes with Lailah, Mikleo, Edna, and Zaveid at once, achieving a powerful armatus that he means to use to purify Heldalf, as the four elements the seraphim represent are the building blocks of the world.