Aselia Wiki
Register
Don't have an account?
Sign In
Advertisement
in: Arria Ekberg, Tales of the Tempest characters, Protagonists
English

Arria Ekberg (アーリア・エクバーグ, Aaria Ekubaagu?) is one of the protagonists in Tales of the Tempest. She is a priestess working for the Church in Janna, though she originates from the remote Adelhabith.

Arria is a priestess of the capital city but does not support the killing of Leymon. She instead joins the group to prevent what the other priests are practicing. During the events of the story, Arria is revealed to be giving information to Albert Mueller, the Captain of the Black Knights. She was once close friends with Albert when they were children growing up in Adelhabith, and the reason Arria originally joined the group was to spy on them. However, she begins to believe that working for Albert is the wrong thing to do, so she warns the group of a planned attack by the Black Knights at the desert town of Laurus. In a difficult moment, she is forced to fight and kill Albert, her childhood love, but at the end of the story, she joins Tilkis Barone in his home country to help eliminate the remaining Spots there.

Arria is a beautiful young woman donning a pink and purple variation of the traditional priest garb. She has fair skin, crystal-blue eyes, and long blond hair that she keeps up for most of the story but lets down after Albert's death. Her default weapon is a crystal staff. Arria is kind and knowledgeable, but she has a weakness for Albert that clouds her judgment during parts of the group's journey. She atones for this after Albert's death, continuing with the group to save the world.

Arria is a powerful priestess adept in offensive, healing, and support magic. Her offensive spells consist of the elements Earth, Wind, Lightning, and Dark, while her healing magic matches that of Rubia Natwick's. In addition, while Rubia's support spells are defensive, Arria's are offensive.

Status image in Tales of the Tempest. 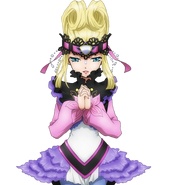 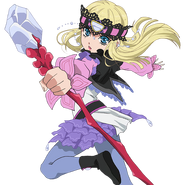