Atwight was a physician for Laville Clemente, a hero and fellow Swordian. While in her human guise, she was also in love with Dymlos, a Division Commander in the 1st Er'ther Army who would later go on to become the Swordian of Rutee's future husband, Stahn Aileron. Before her death, Chris Katrea charged Atwight with watching over her daughter and protecting her, a promise Atwight kept until she was destroyed while breaking apart the Eye of Atamoni. She loves the girl as a mother would her daughter and tries her best to keep her out of trouble, though it is not always effective. Atwight is kind and patient but will tell Rutee her true opinion on matters no matter what the girl thinks.

True to her human counterpart's abilities as a medic, Atwight is the only healing-oriented Swordian. She is uniquely capable of single-target and group healing, and she can provide support through her status boosts and debuffs. Through her Water-elemental focus, Atwight has a fair selection of Water-elemental attack spells imbued with the chance of causing enemies to fall asleep when hit by her attacks. Despite the curvature of her design as a sword, her partner Rutee uses her primarily as a piercing weapon, choosing to stab enemies with the tip of Atwight's blade in most of her melee attacks.

Tales of the Rays marks Atwight's first appearance as a playable character. Despite wielding a saber, her basic "attack" action is a small-range healing centered around herself that restores a miniscule amount of HP to her and nearby allies. All of Atwight's artes are spells: offensive ones include Water- and Ice-based spells, few healing spells that in addition to restoring HP also recover a portion of party members' MG, and some stat-enhancing spells. 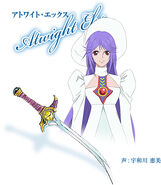 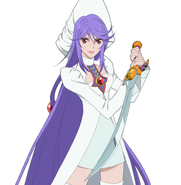