Aselia Wiki
Register
Don't have an account?
Sign In
Advertisement
in: Tales of the Abyss locations, Worlds
English

Auldrant (オードラント, Odoranto?) is the world in which Tales of the Abyss takes place. The planet and belt surrounding it are composed of particles known as fonons, a basis for its civilization. It is orbited by Luna, its satellite, while the planet itself orbits around a star, Rem.

Early in Auldrant's history, all of its continents were merged into a large, unified land mass that experienced a continental drift over time, eventually resulting in the geography depicted in the story. The world of Auldrant is divided into two separate layers: an outside shell called the Outer Lands and an underground ocean of deadly miasma and mud known as the Qliphoth. Originally, the Outer Lands resided within the area now occupied by the Qliphoth, but a natural disaster caused it to fill with miasma, and the people were forced to raise the land and live in the sky through the efforts of a plan known as the Float Project.

The Outer Lands consist of five continents: Rugnica, Aberria, Radessia, Padamiya, and Sylvana; it is divided into three nations: the kingdom of Kimlasca-Lanvaldear, the Malkuth Empire, and the theocracy of the Order of Lorelei. Three provinces exist outside of these national realms: Chesedonia, an autonomous, desert city located in eastern Aberria that focuses on trade; Yulia City, an ancient city located east of the continent of Padamiya; and Nam Cobanda Isle, a circus-like city hidden in northwestern Radessia. Though technically not considered a continent, the Ispanian Peninsula is a land mass attached to Aberria and connected to Rugnica by Rotelro Bridge. The world is held together by basic particles of each element known as fonons. These travel in and out of the planet's crust via a never-ending stream called the fon belt. The Outer Lands are kept suspended in midair by fonons from the fon belt, amassed into a series of gigantic pillars known as Sephiroth Trees.

Additionally, there is the Central Ocean, located in the center of the map; the Albert Sea, located between Rugnica and Aberria; Nirni River, the waterway the story's protagonists travel in order to reach the Sephiroth Tree located on Radessia; the Tuft Archipelago, the group of islands containing the Absorption Gate, which are considered to be part of Sylvana; and the Qiubi Peninsula, the lowest portion of land on the Rugnican continent. There is also Luke Bridge, which connects Aberria and Radessia.

Early Wars and the Score

The people of Auldrant first discovered memory particles in B.D. 2550, and by B.D. 2618, the first recorded war, the Sephiroth War, began. The war was a battle among three major countries seeking to possess the land around the ten Sephiroth Trees, the planet's fon slots. At the time, Auldrant was divided into six major countries, themselves made of several smaller states, with the main countries being the kingdoms of Ispania, Frank, Keter, and Hod. In B.D. 2624, the Sephiroth War ended, and ten countries gained control of each of the Sephiroth Trees. Professor Southern-Cross developed the Planet Storm in B.D. 2677, and five years later, it was put into motion with every country's approval.

In B.D. 2693, Yulia Jue was born in the city-state of Hod. A controversial prophet, she eventually formed a pact with the aggregate sentience of the Seventh Fonon, Lorelei in B.D. 2707, twelve years after its discovery by Professor Southern-Cross in B.D. 2695. The Fonic War, a battle fought over the area where the Seventh Fonon was found, began in B.D. 2699 and resulted in the deaths of roughly half the entire population. Hod and Keter were devastated due to the war, and due to the powerful fonic weapons used during the war, a disastrous strain was placed on the Planet Storm, eventually causing the core to vibrate and emit a lethal, poisonous gas known as miasma. Around the time Yulia formed the pact with Lorelei, she designed the Key of Lorelei, harboring Lorelei's power within, and eventually uses this power and her Fonic Hymns to revive Hod.

In B.D. 2709, Yulia read the Planetary Score and predicted 2,000 years of history. She warned the warring countries of the dangers of fonic weaponry, and how the miasma would soon grow worse because of it. Subsequently, the Fonic War ended that year. A year later, with the land still greatly affected by the amount of miasma leaked during the war, Yulia, alongside her ten disciples, proposed the Float Project, a plan to raise the land utilizing the power of the Sephiroth Trees.

However, by B.D. 2712, the kingdoms of Ispania and Frank began fearing Yulia's influence, now revered a goddess by the masses. They bribed her seventh disciple, Francis Daath, arrested Yulia on the basis of attempting to turn the world into the Qliphoth, and imprisoned her. Francis ran away with Yulia's First through Sixth Fonstones and formed the Order of Lorelei with the support of Ispania and Frank. However, Francis was struck by fear to discover his fate in their contents and soon regretted his actions. Meanwhile, the Float War began, a war waged by Ispania and Frank against those who endorsed Yulia's Float Project.

New Era and the Outer Lands

The Float War ended in B.D. 2713 with Ispania and Frank victorious, and Yulia was tried before the International Court of Judgment, found guilty, and sentenced to death. The beginning of a new era began with Ispania and Frank putting the Float Project into motion in N.D. 0001, or B.D. 2714. They raised the land, forming the Outer Lands, and left their enemies countries in the Qliphoth. Francis, filled with regret, rescued Yulia from prison and helped her escape. Although Yulia forgave his actions, he committed suicide out of guilt, and she later named the headquarters of the Order of Lorelei "Daath" in his memory. Yulia then gathered the people remaining in the Qliphoth and constructed Yulia City with them.

In N.D. 0006, Yulia's first disciple, Freyr Albert, became the first Fon Master of the Order, under her guidance. In N.D. 0213, unsettlement among Ispania and Frank began to grow, and both countries completely opposed each other by N.D. 0294. Ispania eventually fell in N.D. 0447 after being betrayed by one of its states, Kimlasca, which soon rooted its own kingdom. Its first leader was King Julius, and Frank began to decline at this point. Over time, Frank became nothing but a state known as Malkuth, which Kimlasca soon colonized. In N.D. 0468, Malkuth declared its independence from Kimlasca, giving birth to the Malkuth Empire. The Order of Lorelei gained territory in the Malkuth in N.D. 0510 and supported the Empire from that point forward. By N.D. 0516, Malkuth controlled half the Outer Lands' surface.

A new war began in N.D. 0657, the War of Radiance, between Kimlasca and Malkuth, which resulted in Kimlasca losing some territory to Malkuth. The war ended the following year in N.D. 0658 with Kimlasca victorious due to the influence of the Order of Lorelei. From this point forward, Kimlasca took the Order more seriously. In N.D. 0674, Kimlasca invaded the Rugnican continent, which was Malkuth's territory, initiating the North-South War, which lasted until N.D. 0777. Six years later, Kimlasca gave the continent of Padamiya to the Order of Lorelei, resulting in the land mass becoming land of non-aggression.

The Rotelro War began in N.D. 0831 and ended in N.D. 0864. It was not until N.D. 0966 that Kimlasca and Malkuth both signed a peace treaty through the intervention of the Order of Lorelei. Over 500 years later, in N.D. 1401, the First War of the Borders initiated due to Yulia's fonstones falling from the fon belt and the Order claiming the country that gathered them would be recognized by Yulia as the sole authoritarian state. The war ended in N.D. 1463, and it was at this point that all countries other than Kimlasca and Malkuth were relinquished. However, the Second War of the Borders, which concerned the validity of the Score, began in N.D. 1498 and ended in N.D. 1503.

After Gnomeday, a new week begins with Remday again. Each month has 58 days except for the month of Lorelei Redecan, which has 60 days. The yearly calendar consists of thirteen months. Their names, in order, are as follows:

After a full cycle of thirteen months, one Auldrant year ends and another begins. The total amount of days in a year on Auldrant is 765. 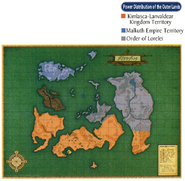 A map of Auldrant and its territories.

A structural diagram of Auldrant.

A construction diagram of the fon belt.