Baruk Songram (バルック・ソングラム, Barukku Songuramu?) is a supporting character and later a minor antagonist in Tales of Destiny. He serves as the Oberon branch manager of the Calvalese region, with headquarters stationed in the desert port town of Cherik.

The group first encounters Baruk in Cherik while pursuing Lydon Bernhardt, who has fled with the Eye of Atamoni. Leon Magnus suggests speaking with the Oberon executive for any leads, but the group quickly realizes that the people of Calvalese are not kind toward strangers. Nonetheless, the group locates the local Oberon headquarters, and Leon exchanges friendly gestures with Baruk, who asks if the townspeople assisted in the group's finding their way around the town. Leon admits that the townspeople were not talkative in the least, but Baruk merely laughs, claiming the people of the region are historically "thick-headed" due to the Aeth'er Wars. Baruk then makes an obscure comment about the people of Calvalese being heroes before introducing himself to Leon's companions. Stahn Aileron compliments Baruk's involvement in the town, and Baruk modestly changes the subject to the group's mission, which he learned about through Hugo Gilchrist.

Baruk claims to not have any leads for the group other than the fact that a large ship arrived at the port recently. Stahn thanks Baruk for his helpfulness before Baruk comments on Stahn's relationship with Leon, claiming to have never witnessed Leon cooperate with anyone so well. Although this sparks Stahn's enthusiasm, Leon is quick to dismiss Baruk's assumptions and engage in a brief argument with Stahn over their relationship. After Leon leaves, Baruk attempts to console Stahn by stating that Leon has always been that way, while Stahn retains his optimistic attitude. Baruk later appears in the Calvalesian capital of Kalviola, having rescued the group from a hoard of basilisks summoned by Lydon in the city's Straylize Temple, at the behest of Leon. Baruk then readies the group a ship to Neuestadt, where sea monsters have begun appearing, and again comments on Leon's surprising cooperation with the group.

Baruk remains absent throughout a majority of the game's plot, reappearing as one of Hugo's mysterious hooded subordinates after Lydon's defeat and the retrieval of the Eye of Atamoni. His identity is not unveiled until later, however, after Hugo uses the Eye of Atamoni to resurrect the Aethersphere and its aeropolis cities. With Hugo's three Oberon executives joining him as accomplices, he appoints them to three of the revived aerial cities. Baruk is appointed the guardian of the Cloudius control center. When the group infiltrates the plant-infested city to deactivate the guardian Flying Dragon preventing them from using Radisrol to enter Dycroft, they find a hooded Baruk in the control room of the facility. When Baruk tells the group that he will not allow them to do as they like, the few who met with him in Cherik immediately recognize his voice.

Baruk then reveals himself and claims that conflicting methods have led to him stopping the group. A battle then ensues, and the group emerges victorious, leaving Stahn to interrogate a dying Baruk, who claims that his ideals will not die like his body. He then explains that he is from Calvalese, and that the stigma from the Aeth'er Wars told him which path to take. Stahn cannot comprehend Baruk's methods, shouting that there must have been another way to save Calvalese. Baruk lingers on this thought, claiming that he contemplated his situation and the suffering of his people for a long time. His last words mention the importance of the Aeth'er Wars and Hugo's goal, but they trail into nothing with his final breath, leaving Stahn and the others to deactivate the guardian dragon. 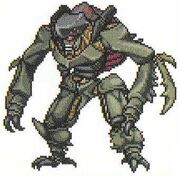 Baruk is a professional and highly-regarded man whose ideals lead him to aid Hugo in his goals. He has dark skin and long purple hair, which he keeps tied in a small ponytail. His attire consists of a green, jacket-less suit that denotes his position as one of Oberon's chief executives. Although Baruk is adamant in helping the poor populace of the Calvalese region, he ultimately recognizes that the circumstances are too great for things to improve for them. This is why he cooperates with Hugo, as he believes in starting from nothing in order to save the world.

In battle, Baruk fights inside a mechanized, insect-like suit that provides him with impressive strength and the ability to conjure insect creatures to aid him in combat. While these insects swarm the field, Baruk fights with hard-hitting punches, swings, and strike artes. He is also capable of inflicting the "Petrify" and "Paralysis" status ailments, the latter being through his Strain Needle (ストレインニードル?) move, which becomes available to him once his Blast Gauge reaches 100%.