Beryl Benito (ベリル・ベニト, Beriru Benito?) is a protagonist in Tales of Hearts.

Beryl is a painter who fled her hometown to become a court painter. When Kor Meteor and his friends meet her, she tells the group to go away because they will steal her ideas. Later, she ambushes Ultra Marine, who had hired her and set her into a trap to get her Soma. The group sees that Beryl is being affected by Kohaku Hearts's "Doubt" Spiria, and she banishes them with magic. When they find her, they all go inside her Spiria Nexus and defeat the xerom. She decides to trust the group, and Kohaku's Spiria is recovered. Later, it is discovered that Ines Lorenzen recovered the items stolen to incriminate Beryl, and her Soma becomes Ines's property. However, she lets Beryl keep it.

Beryl appears as a young girl with gray eyes and long blond hair that trails into three ponytails. She is fairly small for her age, and her personality tends to reflect this. Her attire consists of a cream-colored robe top and magenta-colored overalls adorned with a large pink ribbon. She wears a brown, witch-like hat, long pink socks, and brown boots. Her Soma is a large paintbrush that once belonged to her grandfather.

Beryl often serves as a comic relief character in otherwise serious situations, either complaining about the events at hand or panicking to make matters worse. She is also very emotional and at times runs away from the group when she needs to be alone or feels she is unwanted. Despite these characteristics, Beryl is hopeful when it comes to her artistic talents, and she longs to be a court painter like her grandfather was.

Beryl's weapon is the Soma Terracotta (ティエール, Tieeru?, Thiers), a giant paintbrush. This weapon does not change throughout the story, but when her Soma evolves, it becomes stronger. When Beryl's Soma reaches its final evolution, it is considered her ultimate weapon. Beryl serves primarily as a mage. She has Water, Earth, and Darkness magic, which she calls forth with her brush by "painting" the incantation. Alternatively, she can use physical attacks with her brush against enemies in short-ranged combat. Her Combination Blaster is Crazy Comet, in which she draws a spell circle and launches several comets against her enemies. On the second playthrough, under certain conditions, she acquires three extensions from Crazy Comet: Twinkle Star, Mix Master, and Princess of Mermaid. 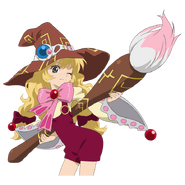