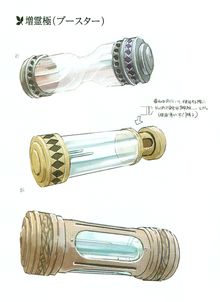 A booster (, soureigoku / "buusutaa"?, "Increase Spirit Greatly") is a device that makes spirit artes more powerful. Its use is not without cost, as it can cause afflictions such immense pain or decreased lifespan.

Boosters are technology designed by Auj Oule to increase the mana generated by the mana lobe, based on spyrix research stolen from Rashugal. Incomplete versions of boosters were used during the Battle of Arklund to sway the tide of battle. Wingul took interested in them and spurred their development at Labari Hollow.

Wingul volunteers to test the first generation of boosters, having it implanted in his brain. It greatly increases his power at the cost of pain. Under its effect, Wingul enters a battle mode signified by his hair turning white and only being able to speak the Long Dau language.

The data obtained from Wingul allows the second generation of boosters to be developed, which are able to be used externally. Elize shows promise with these boosters, but the researchers are unable to get much data from her due to her reserved personality.

The third generation of boosters are developed to solve the problem of obtaining data from reticent users. They are designed to read and then voice the thoughts of their users; in Elize's case, her booster is Teepo. Their high compatibility eventually leads to Teepo's data being stolen to further research.

Boosters are an important part of the development of spyrite. By using a booster to increase the mana generated, researchers are able to inject mana into a spirit fossil and revive the associated spirit to perform spirit artes. It is a more eco-friendly variant of the spyrix technology that spawned boosters.

v • e • d
Lore for Tales of Xillia and Xillia 2
Community content is available under CC-BY-SA unless otherwise noted.
Advertisement