Bruiser Khang (マイティ・コングマン, Maiti Konguman?, "Mighty Kongman") is one of the playable supporting characters in Tales of Destiny. He is a powerful arena-fighter and a reigning champion within there, although he is more recognized on his bald head. In the original Tales of Destiny for the PlayStation, he is a purely optional character who can be persuaded to join at any time. However, in the PlayStation 2 remake, he joins the party as part of the game's storyline.

Khang is called a living legend in the town of Neuestadt. This is due to the fact that he is the champion to the arena and for many years, and he has yet to lose the title. He has no discrimination in choosing an opponent and thus, when a woman stands up to fight him, he will not hold back. However, if the woman does not come with fighting intentions, he will act friendly toward her.

While life seems like unchanging, one day Khang receives a "visit" in the arena right after he defeats a random challenger. This visitor is the Oberon Branch Manager of Neuestadt, Ilene Rembrandt. Khang mistakes her as his next challenger, but Ilene passes. Khang then points out to her guest, Stahn Aileron and asks if he is the next challenger, but Stahn acted as if he is uninterested. This irritates Khang to the point that he begins throwing insults and even verbally harasses Ilene.

This, in turn, angers Stahn, and in the end he opts to fight Khang. The outcome varies depending on Stahn's performance. If Stahn wins, he will eventually leave, but the head director decides that the match becomes a non-title match and thus Khang retains his title. If Stahn loses, he will be treated in the waiting room and when he wakes up, Khang apologizes for his rude behavior. He also points out Stahn's potential in strength and hopes that he will fight him again someday. However, he promises that he will win again.

When Stahn and the others leaves Neuestadt via port, Khang heads there and bid farewell to him. Eventually, the usual life in the arena resumes for Khang again. However, at a point, the player may opt Stahn to return to the arena again and challenge Khang once more. If he wins, Khang will join Stahn in his entourage and becomes involved within a quest that stakes the safety of the world. However, even if he is not included in the party, Khang is still considered a friend by Stahn and is invited in Stahn's yearly reunion after he saves the world.

In the remake, he joins the party in the monster attack to Neuestadt and helps Stahn and the others to capture Batista Diego. Then he bids a sad farewell to Philia Felice, to later rejoin when Stahn and Philia are about to take a ship in Neustadt after they heard the Eye of Atamoni was captured yet again, where he becomes a permanent party member throughout the story. However, he does have a major role in the story and rather supports the party in every way he can, even as a comic relief character.

Due to his lack of character development, or rather dialogue, in the original version, Khang is seen as a rather simple character. He is hot tempered and has a strong sense of rivalry, especially against Stahn, who he sees as an opponent of equal strength, after defending Ilene and successfully defeating him within Neuestadt's local arena. He holds his title of Champion with extreme pride, and his catch-phrase is literally "I'm the champion!".

In the PlayStation 2 version of the game, however, he is expanded to have more of a backstory toward honesty, which extends to him holding his title of champion through honest means outside of fixed-matches. He also acts as both comic relief and as a foil who is willing to keep others in line if they act too brashly from their emotions, especially toward Stahn's younger nature. He also harbors an unrequited crush on Philia.

Khang is known for his devastating fighting style. He prefers to use his muscles rather than weapons, fighting as a brawler with wild movements in contrast to the refined style of a martial artist. During battle, he runs much slower than any other character, but his speed increases dramatically within the air, and he has brute strength to overcome his shortcomings. Unlike every other unarmed fighter in the series, Khang has access to a largely unique movelist.

Khang appears in the second installment of the Radiant Mythology games as a playable character. Khang does not appear as a normal storyline character but as a special match in the arena. After defeating him the first time, he will hold a rematch fight in the tournament selection. After defeating him in the second match and when the player returns to the Van Eltia, Khang will arrive yelling out the Protagonist's name ordering them to come on out and fight him. Chat comes out yelling at him for barging into the ship and he orders Chat to bring out the player. Philia comes after asking him if he needs an help, Khang blushes and gets embarrassed. Out of the embarrassment he tells her that it was huge misunderstanding and agrees to become apart of the guild.

Khang appears a playable character in Tales of VS., where his artes are taken from the remake of Tales of Destiny, including his mystic arte Tres Bien Hip. In the story, he travels with Philia Felice. The two are competitors in the "Yggdrasill Battle", and are often seen as one of the teams that participates in the finale of the competition, but are the only ones to make it that far who do not have a playable Story Mode. Instead, they are unlocked following the completion of extra events during the Luke fon Fabre and Tear Grants story and Jade Curtiss and Anise Tatlin story. 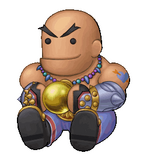