Celsius (セルシウス, Serushiusu?) is the Spirit of Ice. Celsius has appeared in several games of the series as a character or cameo and can be summoned through the Celsius arte. Celsius is opposed by Efreet, the Spirit of Fire, and she is often seen with her wolf partner, Fenrir (フェンリル, Fenriru?). In most appearances, she appears as a blue-skinned woman specializing in martial arts.

Celsius makes her first appearance in Tales of Eternia as one of the Greater Craymels and one of the Primary Craymels of Celestia. The Ice Craymel governs the use of all Ice-elemental spells. Found in Mt. Celsius, the party must brave a frigid blizzard to meet her. Once there, she is unable to communicate to the party, and when Efreet appears, attacks them. Once subdued, Gnome rushes out and sends Efreet away before talking Celsius back to her senses. In gratitude, she joins the party. She is also the one to tell the group that something was wrong with Volt. Celsius herself can be summoned through the arte Celsius.

In battle, Celsius shares a martial arts-based fighting style with Farah Oersted, possessing many of the same artes. She is also capable of quickly casting Ice-elemental Craymel Artes like Ice Needles and Absolute. Celsius likes to chain attacks together; she usually precedes Chi with Mirage in order to dodge behind enemy guard, uses Ice Raid to knock an enemy down before unleashing Maximum Burst, and will use Icicle Fall to protect her as she casts spells. 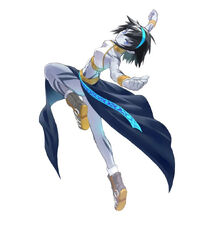 Celsius, the Disciple of Everlasting Ice, appears in Tales of Symphonia as one of the Tethe'allan Summon Spirits. She appears as a short-haired, pale woman. She resides in the deepest levels of the Temple of Ice. She is a proud being, who challenges the party with her wolf Fenrir at her side. The flower capable of freezing anything it touches, the "Celsius's Tear", is named after her. She herself can be summoned through the arte Summon: Ice (降霊召符・氷, Koureishoufu: Koori?).

In battle, Celsius fights using a martial-arts based style similar to her Eternia appearance. She uses Swallow Dance and Beast, as well as cast Ice-themed spells such as Freeze Lancer and Ice Tornado. Celsius can also use Ice Spear (氷槍陣, Hyousoujin?, "Ice Spear Position"), where she slams her fist into the ground and causes icicles to erupt around her, and gains an arcane arte in the PlayStation 2 port of the game called Shattering Roar (獅吼氷砕撃, Shikou Hyousaigeki?, "Lion Roar Ice Crush Attack"), where she first kicks an enemy and summons an iceberg around the foe before releasing a Beast through it.

Celsius appears in Tales of Legendia as one of the Summon Spirits. Celsius first appears when the Merines attacks the party, using the cover of a snowstorm to whisk the party to safety. One of the first indicators of Grune's unworldliness, as only she can see her, Celsius turns into a seed to rest in Grune's urn, which Grune then plants in front of Will Raynard's house at the beginning of the Character Quests. At the end of the story, Celsius is born from this seed as one of the Summon Spirits bequeathed onto the world. Given her nature in other games and the manner in which she saves the party, she is associated with the game's Ice element. Celsius is the only Summon Spirit to have her own theme in the game, "Celsius". It plays after she saves the party from Walter Delques. The theme is a softer version of "Let's Talk", which is played when Grune revives the Summon Spirits at the end of the game.

Celsius appears in Tales of Xillia as the Great Spirit of Ice revived using the newly-developed spyrite technology. She is under the control of Gilland, who considers her to be nothing more than a tool and is seen to use force to keep her in line. She fights the party alongside Gilland on board his flagship, using speedy martial arts and Ice-elemental artes. She can also act as a Link partner for Gilland. She is destroyed after the two are defeated in battle.

Celsius returns in the sequel as one of the focus characters of Jude Mathis's character chapters. Jude is the leading researcher into spyrite technology, and though his work isn't complete, there is increasing pressure for him to release his developments. One man attempts to bribe Jude with Celsius's recently recovered spirit fossil, which are basically the remains that Gilland once used to summon her. Though he is rebuffed, the man leaves the fossil behind. Believing that it is the next necessary step in their research, Jude's assistant Mary uses his experimental device on Celsius's spirit fossil. Though it successfully incarnates her as a spyrite, Celsius is in incredible pain and rebels, proclaiming that Jude's device enslaved her. Horrified by the results, Jude immediately halts all development on the current device, and Celsius disappears.

Later, Jude receives word that the ice climate at the Kukhar Ice Caverns is acting strangely and travels there with Ludger Will Kresnik and Milla Maxwell. They find Celsius, and after fending off her attack, they begin to speak, though Celsius is fatigued as the mana remaining in her spirit fossil, and with it, her remaining time as a spyrite, dwindles. She reveals that 500 years ago, a small town existed near the cavern, though no remnants remain. Jude, Milla, and Ludger resolve to help her find the traces of her past. She then rests until they are ready, at which point they go to three places: the Kijara Seafalls, where young lovers would climb to the top of the waterfall to prove their love, Fennmont, which used to be an empty field where one could watch shooting stars, and Fort Gandala, where she first met the one who is the reason for her nostalgia: Dr. Howe, he who ushered in the age of spirit artes.

Celsius reveals that he was but a lovesick man who simply wanted to get closer to her, and though she speaks of him with harsh words, there is an undercurrent of affection there as well. Jude learns that his goal for a world where humans and spirits live in harmony is not a new one and that his current relationship with Milla is similar to one Dr. Howe and Celsius once had, with the implication that the places they visited before and the actions he and Milla enacted were things that Celsius and Dr. Howe once did. Though Celsius remains skeptical of their goal, Jude and Milla decide to prove to her the strength of their convictions in one final clash. After seeing the bond between Jude and Milla, Celsius fades as she expends the last of her mana, believing that the pair can achieve the future that she and Howe once dreamed about.

Celsius appears in Tales of the World: Narikiri Dungeon 2 as an optional boss found in the deepest part of Ice Cave. Celsius appears as her Tales of Eternia incarnation. Once defeated, she gives the party the "Freeze Ring", which can be combined with the Female Snow Fighter costume to create a costume in her image that Caro Orange can wear.

Celsius appears in Tales of the World: Narikiri Dungeon 3 as a boss and a costume Caro Orange can wear. Like in Narikiri Dungeon 2, Celsius appears as her Tales of Eternia incarnation. She appears as a boss in Mission 18 in the Cave of Ice. Combining the "Celsius's Tear" root item, which can either be stolen from her, found in the Labyrinth of Fire, or bought from Mell and Dio's Costume Ship, with the "Farah" costume will create a costume in Celsius's image.

Celsius appears in Tales of Symphonia: Dawn of the New World as a Summon Spirit, although she is unable to be used in battle. In one of only two instances that show she is still capable of summoning, Sheena Fujibayashi summons Celsius to protect the party from Alice and Decus in the Temple of Ice, which is also where the core of Glacies, the Centurion of Ice, is found. Her image was then used by Tenebrae to distract guards in Altamira. In reference to her position as the Summon Spirit of Ice, her name is attached to the monster grimoire which teaches an Ice-elemental arte: "Celsius's Sigh", which teaches Icicle Rain.[2]

Celsius appears as a playable character in Tales of the World: Radiant Mythology 2. She has access to the "Spirit" job with the title of "Greater Craymel" and is based on her appearance in Tales of Eternia. She is one of the planet's Spirits and guards Garret Village. Celsius first appears in the game during the ninth story mission when the Protagonist, along with Annie Barrs and Ruca Milda, travel to the Garret Woods to find Veigue Lungberg, Mao, Eugene, and Claire Bennett. At the end of the woods, Celsius is standing upon a pillar refusing to return Claire to Veigue. Celsius jumps off the pillar and reveals she is under the control of Goede's negative energy. She then fights the Protagonist and party, but is defeated. Celsius regains her senses after the battle due to the Protagonist's light and gives Claire back to Veigue. Celsius is the one who reveals to everyone that the Protagonist is the legendary Descender. She heads to the Van Eltia after and becomes a recruit for the player to take on missions.

Later in the story, she goes with the Protagonist and Kanonno Earhart to the snowy path to place the last antenna. There they find Goede, and he upsets Kanonno physical appearance by attacking her with negative energy. After placing the antenna in the area, she returns to the Van Elita. After Goede is finally defeated, Celsius is on the Van Eltia looking at the mana spreading across the world. In the arena, Celsius can be fought as a special opponent. Due to the fact she is a Craymel, the music played during her battle is "Fighting of the Spirit". Additionally, the Spirit Stone for Garret Woods, created by gathering the Fragments of the Ice Spirit, depicts Celsius in her Symphonian appearance.