Chalcedony is the commanding officer of the thirteenth unit of the Crystal Knights, a force organized by the Valentin faith. He respects those that are just and fair, and hates cowardly acts.

Chalcedony battles in the air and uses his Soma Wahrheit (バルハイト?), which is the form of a sword and armor that gives him his ability to fly. 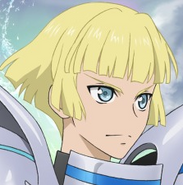 Cut-in image for Immortal Phoenix in Tales of Hearts R.