Chat (チャット, Chatto?) is a playable character from Tales of Eternia who serves as the pilot of the primarily maritime vessel Van Eltia.

The party first meets Chat in her home, a cottage within the world of Celestia, shortly after leaving Gnome's Cavern. When the team first enters the cottage, they are knocked out with sleeping gas and then forced to try to find their way out of seven strange basements with the use of rubber ducks. After they find their way out of the trap, Chat welcomes the party by congratulating them on being able to escape.

Chat tells them that she is a descendant of the legendary pirate Aifread and that she wants them to join her crew. According to her, she needs more crew members to help her maintain her ship, the Van Eltia. Chat is accepted into the group, thereafter using the Van Eltia to go to their destinations. Chat is able to join the active battle party at any time after this event. At the end of the story, Chat, along with Reid Hershel and Farah Oersted, prepare to travel to Celestia to visit Keele Zeibel and Meredy.

Chat is a very confident girl with too much sense of her own importance. She is deeply proud of her heritage as the great-grandchild of Aifread the famous pirate, and she tries to follow in his footsteps. Chat idolizes Aifread, and she becomes annoyed if his character is slighted. Although she and her great-grandfather are pirates, she maintains that they are honorable pirates. Like her ancestor, Chat is also very fond of puzzles and tricks. She is very bad at arithmetic, but she greatly enjoys technology and mechanics. She has a phobia of animals, which leads her to have a bad reaction to Meredy's companion, Quickie.

Chat's weapon of choice are handbags, which she uses to bash enemies or store various hammers which are thrown from the handbag, such as the series staple Pow Hammer. She also has the unique ability to steal items from enemies using the arte Rover Tool. Chat is one of two optionally recruitable characters, along with Max, and as such, she does not have access to Divine Skills.

Opening still from Tales of Eternia. 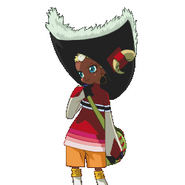 Status image in Tales of Eternia. 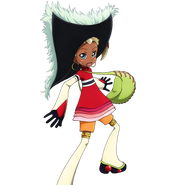