According to Alba Torn, Chelsea comes from a noble family in Phandaria, most of whom were killed during the civil war that preceded the events of Tales of Destiny. Chelsea's mother sent her to Alba in order to keep her away from suffering during the aftermath of the war and died soon after from a plague that swept Heidelberg. It is never stated whether Chelsea is a blood relative of Alba or whether she calls him "grandfather" as an endearing term. Garr Kelvin mentions their similarities in mannerisms in terms of genetics, but the events afterward imply that Garr is largely unfamiliar with Chelsea's past, making it possible that he refers to Alba as Chelsea's grandfather because she does.

Alba's relationship with Chelsea was strained when he was unable to tell her about the death of her mother, but she develops a deep sense of concern for his well-being. As Alba is a master archer, so too does Chelsea train in archery. She appears to be an avid reader despite her outward whimsical personality, and Alba suggests that she acts that way deliberately to conceal depression and introspective thought. Her bookshelves contain numerous books on philosophy and etiquette that both Garr and Stahn Aileron appear intimidated by.

The arrival of Stahn in the opening events of Tales of Destiny reveals Chelsea's deep admiration for Garr, who is also training with Alba. These feelings frequently take a playfully romantic tone, as Chelsea is unashamed of admitting that she longs to be Garr's wife and serve as the Queen of Phandaria. Regardless of whether or not these feelings are genuine, Chelsea idolizes Garr and has a strong desire to follow his lead. Stahn first encounters Chelsea in the forest near Alba's cabin, where she is found crying in private. She is shown to be outwardly emotional during later events in the story, but she draws a line between being seen brooding over certain thoughts while unconcerned when seen becoming emotional over others.

Chelsea is not seen again until the second half of the story, when she either follows Garr or is summoned by him to Heidelberg Castle. It is quite possible that she is summoned directly due to the fact that she is a remaining scion of a noble family and a guaranteed political ally in rebuilding the power structure demolished by Lydon Bernhardt's takeover. When Stahn and Philia Felice request Garr's assistance to recover the Eye of Atamoni after it is stolen from Seinegald Castle, Garr refuses to allow her to accompany them when he leaves.

Chelsea is small in stature, has green eyes, and long pink hair that is kept in a rabbit-ear style. Her attire consists of a patterned breastplate and large pink and green shoulder armor. This motif extends throughout the remainder of her outfit with her large pink gloves and green skirt possessing two tails that mimic her hairstyle. She also wears pink knee pads and yellow boots.

In battle, Chelsea is fairly agile and fights with a shortbow, applying the techniques taught to her by Alba. The majority of her attacks allow her to fight safely at a relative distance and retreat into the air by chaining attacks such as Shouha and Hien. She is also capable of healing allies with Cupid Arrow, exclusive to the "Director's Cut" version of the game, although it is an unconventional healing method, as it requires Chelsea to aim the attack at her target in order to be effective. Her first playthrough mystic artes consist of Shiranagi Touga, a single-target, ice-themed attack, and the trademark Wild Geese, a more powerful attack that is capable of hitting multiple enemies.

Sprite image for Tales of Eternia. 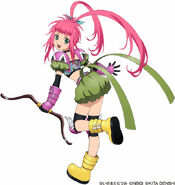