Cheria Barnes (シェリア･バーンズ, Sheria Baanzu?) is one of the female heroines and a main protagonist of Tales of Graces. She is the granddaughter of Frederic Barnes, the butler working for the Lhant house in Tales of Graces. She holds feelings for Asbel Lhant, but refuses to tell him even though the pair make it obvious at times because the feelings are mutual between the two.

Cheria plays a significantly small role compared to the other main characters during this part of the story, due to being ill and serving as an character for story progression rather than a combat character like Asbel, Richard, Hubert Oswell, and Sophie. She first appears when Asbel, Hubert and the mystery girl return from meadow, distraught that the boys left her behind, once again. She tries to run up and confront them, but due her illness, runs a mere few feet in front of her. Asbel rushes to her and reminds her not to run like that, but she was too upset to listen. In a moment of panic, Hubert suggests that he give her the sopheria flower he brought back with him. Upon receiving the flower, Cheria calms down, stating that she "can forgive him just this once". Asbel introduces her to the mystery girl and their quest to find out who she is, to which Cheria shows deep concern and for a moment, seeing the girl as something of a rival for Asbel's heart. Nevertheless, Cheria suggests that they ask Frederic Barnes, the Lhant family butler and Cheria's grandfather.

Returning to the manor, they ask Fredric, who has not the slightest clue who she is. Lady Kerri, Asbel and Hubert's mother, approaches the group and informs Asbel that his father, Lord Aston, wishes to speak with him, much to Asbel's irritation. She also scolds him for letting Cheria accompany him when he plays and forbids him from letting her tag along. After going into a coughing fit while trying to protest Lady Kerri Lhant's decision, she is ordered to be sent home by Fredric. Later on that day, Cheria returns to Asbel and Hubert to find out that Asbel proclaimed himself the guardian of the mystery girl, much to Cheria's shock and disbelief.

After tossing up a few names to call the girl, the kids settle on "Sophie", inspired by the name of the sopheria flower that she was fascinated by. After it is learned that the Turtlez transport carrying Prince Richard was attacked on the East Lhant Highroad, she, Asbel, and Hubert rush to the scene to help. Though Lord Aston Lhant was angry with Asbel for intervening, he was commended by the royal escorts. Sneaking in the through the window on the side of the house, the gang meet Prince Richard, who coldly rejects them under the impression that they were only pretending to friend him to use him later. It is not until Asbel trades places with Richard in his training that Richard really starts to open up to the group. An excited Asbel insists on showing him Lhant Hill and confides in Hubert and Cheria, who stay behind, to cover for him. Sometime during the events on Lhant Hill, Cheria and Hubert reluctantly reveal the whereabouts of Asbel, Sophie and Richard.

When the three return, Asbel is confined to his room while his father and brother travel to Barona, capital city of Windor. Asbel breaks out of his room with the help of Sophie and heads to Barona as well. Upon arrival, the meet up with Cheria once again, who happened to be in the city as well for a doctor visit. Cheria accompanies Asbel and Sophie to meet Richard, whom met up with them at Gloandi, the treasured valkines cryas near the castle. The prince, in disguise, takes the group to a scenic hill along the Southern Barona Highroad, confessing that his father was poisoned and wishes he can create a world without conflict.

The group later returns to the capital, where they run into Hubert and Aston. Richard agrees to reconvene with his new friends later on that night where they will go to castle via secret passage. When Richard never shows up, Asbel and the group go search for him themselves and stumble across the Barona Catacombs, where they find Richard's unconscious body. Trying to awaken him, the friends are soon attacked by a large monster that immediately hits Cheria and Hubert into a cave wall, knocking them out. Eventually, the whole party is attacked with Sophie presumed dead due to the monster impaling her and leading her to sacrifice herself for the friends, unleashing a strange power that is absorbed by Asbel, Cheria, and Hubert.

About a week later, Asbel awakens and is infuriated when his father announces that Sophie was dead and that Hubert was adopted by another family. Proclaiming that he is declining the responsibility of being the next lord to become a knight and storming out, he is approached by Cheria, who overheard everything and begged him not to leave. She insisted that she can "replace" the lost children with herself and do the best she can to make up for them being gone. This deeply angers Asbel, who yells at her for even suggesting that. She tearfully apologizes and Asbel simmers down, blaming only himself for the losses. He falsely tells Cheria that he will stay in Lhant and, the following day, leaves without her knowledge.

Seven years later, Cheria meets Asbel and Malik Caesar in Barona and informs Asbel of his father's passing, an event relayed to him via letter from his mother, but one which he never read. After being told by Malik to return to Lhant to check on the town's status, Cheria accompanies Asbel back home. While Asbel is joyed to see her and in better condition, Cheria acts distant and extremely cold to him. She reveals that she acquired the power of healing and coldly tells Asbel that she can fight for herself and that she does not need him to protect her from monsters anymore. Upon returning to Lhant, they are approached by Bailey, one of the town's militiamen, and told that Frederic had been apprehended by the invading Fendel forces. The couple rescue him and lead a strategic move to drive the forces away through Lhant Hill. When the two seemed at a bitter loss, the reincarnation of Sophie, or who the two believe may or may not be Sophie, save the two in the clutch and accompanies them to battle the forces. The plan is a success and success and they forces of Fendel temporarily draw back. When the two return to Lhant, Cheria breaks off to tend to the wounded.

Back at the manor, Asbel assumes responsibility of Lhant and maps out their next move to drive Fendel's forces out completely through use of a nighttime attack. Cheria accompanies him, claiming that she wants to protect her home. While heading to the North Lhant Highroad to the caverns, where they will launch their surprise attack, Cheria's behavior really started to get to Asbel when he was pondering over this "New Sophie". He confronts her about how she has treated him and how he plans to assume his role in Lhant. When the Lhant forces reach Fendel's settlement, they find it deserted and learn that Fendel had initiated their own night invasion. The forces rush back to Lhant and find it being aided by Strahta, lead by Hubert.

After a brief quarrel with Hubert, Asbel is removed from Lhant, along with Sophie. She is later seen being comforted by Fredric, who stills expresses concern for her despite her being over her illness. She wanted to deliver news of Raymond's betrayal after hearing his thoughts when Hubert went out of the study but was captured. After the party saved her, Asbel lashed out at her. She retaliated by saying she was trying to help him. She finally confronted Asbel about how he broke her heart and started crying. Asbel apologized and when Pascal and Malik remarked on their relationship, Cheria got mad at them saying she does not care about him. Asbel could not help but laugh and eventually made up with Cheria, creating a new friendship pact with Sophie.

Cheria has short bright red hair and brown eyes. As a child she wore a white dress with teal overalls. As an adult, she wears black ribbons in her hair, a white shirt with long sleeves and and dark red designs, a lilac miniskirt, a blue brooch on her chest, black stockings and white boots. She also wears pink lipstick.

She has a positive personality which lets her face difficulty with cheerfulness. Though she holds feelings for Asbel, she is the type who will not be honest about it. Furthermore she grew distant to those feelings during the long seven years they were separated, making their relationship awkward. She has strong feelings about being useful to the Lhants, as she has been living with them all this time. Also, as a dedicated healer, she tries her best to help every injured individual she can, usually running straight to trouble. After meeting Pascal, Asbel notes that Cheria acts like a mother for the rest of the girls. As one of the core members of the relief organization she is in, many others see her as an angel, mainly due to her healing skills and her gentle personality. Because of this, she has gained the admiration of many of her peers, especially Raymond and Bailey.

Cheria's arte style consists of throwing daggers, allowing her to pressure the enemy from a safe distance. Her burst style consists primarily of holy offensive spells and area-based healing magic with three support spells to augment the party's evasion, accuracy, and resistance against enemies. Cheria is a rather fragile character, possessing the second lowest physical defense parameter in the whole party, coupled with sluggish running speed. However, her base stats are on par with Asbel's, and she boasts the highest arte defense out of the entire party, meaning her stats are weakened mainly due to weapon balancing.

While some of Cheria's arte execution is slow, her fighting style allows her to be mobile after attacking. This allows the player to constantly move while pursuing enemies from afar. By guarding and concentrating, she can perform critical hits easier than the other members by striking from a distance. While her healing spells take longer than Sophie's to chant, they have the ability to heal multiple party members at once. She can also lower her chanting time through mastering titles and performing attack chains. 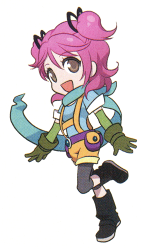