Prior to the events of the story, Chloe belonged to the Valens House, a great line of nobles whose existence is well-known throughout the world. When she was a child she had long, beautiful black hair. One rainy night, however, her parents were murdered before her by a masked bandit with a snake tattoo on his arm. Chloe tried to use her father's sword against him, but the masked bandit told her if she chose to attack that he would show her no mercy. Overpowered by fear, she was unable to avenge her parents, and so the masked bandit stole her father's sword and left.

After the incident, the Valens name was threatened to be stripped from her due to the incident. Chloe tries her hardest to keep the Valens name but, being only a child, she finds it impossible to meet the demands of owning such a status. Chloe blamed everything on the masked bandit and swore revenge. Following this, she ordered her maid to cut her hair, a sign of her oath and a symbol of her determination.

Arriving on the Legacy

After arriving on the Legacy, Chloe claims to be a knight, focused on looking for the man with the snake tattoo. She meets Senel Coolidge and the two start in a rocky relationship: She agrees to help Senel find his sister, her responsibility as a knight. In a rescue mission in the Waterways, Chloe almost drowns in a river but Senel saves her life. This is when Senel first learns that Chloe is unable to swim. He decides to keep her secret among the party members, to her surprise. This marks the beginning of her romantic feelings toward Senel. Chloe finally meets the man who has the snake tattoo on his arm: Stingle, of Vaclav Bolud's three Terrors. At one point, Chloe blindly assaults Stingle, ignoring Will Raynard's urges to retreat. One night, Chloe reveals to Senel that she is not a true knight and explains to him her past, bringing the two to a point of mutual trust. In the bridge of the Legacy, before the party confronts Stingle, Senel reminds Chloe that she can count on them. The party defeats Stingle, but he escapes before Chloe can kill him.

Two weeks after the battle with Vaclav, the Holy Kingdom of Gadoria begins to recognize the Valens name for Chloe's contribution to the country's welfare and safety by defeating Stingle. Even in the process of sarcastically mocking her tarnished name, she humbly obeys them. When the Gadorian Knights interrupt the Rite of Accession by massacring Ferines, Chloe disobeys the Head Knight's order to kill the Merines, knowing this would brand her a traitor.

When Shirley Fennes takes back the "blessings of Nerifes", which sealed the ability of all Orerines to use any kind of Eres, the party retreats back to Werites Beacon, where a mysterious entity guides them to the Fallen Lands, where they learn of the arrival of the Legacy to their planet. While in the Fallen Lands, with Norma Beatty's urging, Chloe increasingly advances on Senel romantically, which sometimes backfires and unintentionally succeeds. After the Calm Nerifes bestows Sacred Eres on all the party members except for Senel, Chloe talks to him and suggests that he could have been the one to reject the Calm Nerifes, not the other way around. Senel then reveals his secrets to Chloe about him being responsible for the attack on his village three years prior. Chloe then points out the he is merely running away from himself, for which Senel humbly thanks her. After defeating the Raging Nerifes and rescuing Shirley, Chloe leaves the Legacy to visit her parents' grave in Gadoria. 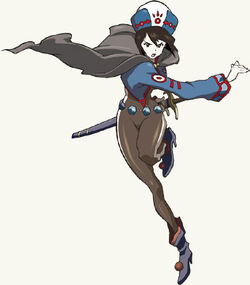 Months later, Chloe comes back to the Legacy to be with her friends. On their way to Werites Beacon, Senel and Chloe save a traveling peddler and his daughter from a monster. The traveler, a man who works with herbs, is known as "Alcott". His daughter, Elsa, takes a liking to Chloe. During her Character Quest, Shirley and Chloe become jealous of one another when Senel decides to be friends with them both. Later on the two come to terms about their feelings for Senel and develop a sort of truce and become good friends, to the point where Shirley starts seeing Chloe as an older sister figure. After her Character Quest, she also manages to open up a lot more, especially with Shirley.

One day after the party finds a missing Alcott in the Hidden Fortress, Chloe notices a snake tattoo on his right hand. She instantly draws her sword, surprising the party. Moments later, however, Norma sees a "Grand Gaet" behind Chloe and assumes her friend's quick hostility was for that reason instead. After the fight, Chloe again begins to think of revenge, the black mist feeding her anger. One rainy night on Werites Beacon, Chloe tries to meet with Alcott but Senel stops her. The two engage in a fight, climaxing when Chloe stabs Senel. Her path chosen, Chloe confronts Alcott in the Forest of No Return.

They duel, the black mist strengthening Chloe's blows. Just as Chloe prepares to deliver the finishing blow, however, the other characters, as well as Elsa, intervene. Her father fallen, Elsa determinedly takes her father's sword into her hands, bringing Chloe back to the night when she refused to do the same for her parents. Senel points out that she is repeating the same sadness she experiences upon others. With the others backing her, Chloe fights the black mist inside her and realizes that she does not want Elsa to share her pain.

Suddenly, though, the black mist manifestation appears in the image of Young Chloe and constantly taunts Chloe to kill Alcott. Chloe refuses to do so and the mist turns into Shadow Chloe and fights the party. Afterward, Chloe forgives Alcott and decides to remain with her friends on the Legacy. In the end, it is unknown if Senel chooses either Chloe or Shirley over the other, but the ending animation of the Character Quest hints that Senel might have feelings for Chloe. Though Chloe believes that his feelings for her are not the same. She states that while she can cry in front of anyone else, she cannot find herself doing the same for Senel.

As a beautiful girl that she is, she wears her black hair short and has brown eyes. She wears some sort of hat on her head. On her body, she wears a tight-fitting bodysuit with a long-sleeved jacket over it. A short cape drapes over her jacket, connected together by some sort of clip. On her waist, she wears a blue buckle where her sword is attached. Lastly, she wears a pair of high-heeled boots.

This young woman is a practitioner of iron eres and has an extraordinary talent with the sword. She is single-minded and focused in achieving her goals, sometimes to the point of irrationality towards other people. Most of the time, she appears very serious and determined, but she also has moments of exuberance, and occasionally worries about silly things, such as her weight or the possibility of turning into a monster. She also has strong feelings for Senel and is initially jealous of Shirley. Chloe does not know how to swim, a weakness she takes very seriously.

Because Senel does not use a sword in combat, Chloe takes up the role of the main swordsman of the party. She has a bit more range than Senel and like other swordsmen in Tales games, she has the ability to string together long combos. A very important skill in her arsenal is her Compound Eres, which allows her to counterattack while completely negating damage. Chloe is a well-balanced fighter with somewhat less HP than Senel, but has sufficient attack and defense to back up her position as one of the frontline attackers.

Chloe appears as a playable character in Tales of the World: Radiant Mythology 2. Chloe first arrives on the Van Eltia when Senel comes to the ship also. Chloe goes with player and Mint Adenade on a mission in the lava cavern their the are attacked by Goede and his monster, after defeating the monster she returns to the ship. Halfway through the story it is revealed that parents were killed and she began to live only for revenge on those who killed them.

After Niata arrives on the ship, she along with Farah Oersted and Anise Tatlin had begun to become confused and astray after staying with Ad Libitum and ran away to the Coral Forest. Chat gives the player a mission to go find her after and take Senel and Kanonno Earhart with them. When the player finds Chloe in the deepest part of the dungeon she is questioning her actions, this causes the negative energy inside herself to grow, eventually manifesting into "Nega Chloe". After the party defeats Nega Chloe, and the Descender purifies her negative energy, she decides to forget about revenge and fights for the purpose of being a true swordswoman. Like Senel, she received a new face image for the game. The sword Chloe uses throughout the game is "Valen's Sword", a key item from her original game.

Chloe is available after one story mission that involves Kyle Dunamis and Sheena Fujibayashi. During an event with Ange Serena and Senel Coolidge, Chloe will appear, and the player will receive a personal request from Ange. She is located on the Snow Mountains, where the party must fight against her before she accepts an invitation into the guild.