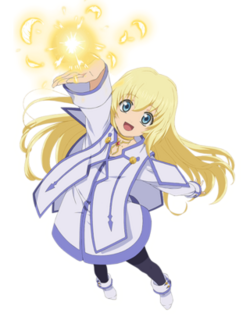 A Chosen (神子, Miko?, "Divine Child"), sometimes referred to as the Chosen of Mana or Chosen of Regeneration, is the name of the savior of the world in Tales of Symphonia. This title is held in high regard in both the worlds of Sylvarant and Tethe'alla. The Chosen is rumored to be a child of angels, and it is his or her responsibility to complete the Journey of World Regeneration. The Chosen's most common form of identification is the Cruxis Crystal he or she is born with in his or her hand.

The Chosen is known to be a member of a mana lineage, and their parents are brought together by the Church of Martel. Zelos Wilder is an example on this, as his father and mother were forced into an arranged marriage despite both of them loving others. Likewise, Colette Brunel's ancestry carries the mana lineage, its marriages having been dictated by the Oracle. Chosen are default members of the Church of Martel and taught its beliefs, as well as angelic language. At some point, Chosen also learn about their destiny at the final seal in the Journey of Regeneration, which is to sacrifice their life and humanity for the sake of becoming an angel. Despite this, most common citizens are unaware of this hidden reality. In actuality, a successful Chosen does not become an angel at all. Rather, he or she loses his or her heart and memory and is taken to Derris-Kharlan to act as Martel's vessel.

At the beginning of the story, the world of Sylvarant has been in decline for around 800 years due to the numerous failed Chosen, who were often killed by the Renegades. The first Chosen of Sylvarant was Spiritua, who was successful in her journey, spurring the prosperous Sylvarant Dynasty and becoming a significant historical figure in Sylvarant's history. Despite her high regard in Sylvarant, she was written as an "Angel of Death" in Tethe'alla's history due to her bringing about the decline of the world. After Spiritua's success, however, many of Sylvarant's Chosen failed after one of Tethe'alla's Chosen succeeded, resulting in an extended period of prosperity for Tethe'alla, as the mana flow between the two worlds had reversed. The failure of Sylvarant's Chosen to reverse the mana flow back resulted in centuries of decline for the world, as evident with its lack of magitechnology and an organized government.

One of Sylvarant's failed Chosen was Nora, who was involved in the destruction of the old Triet. Records in the Tower of Mana indicate that, while Nora was releasing a seal in Triet, one of her priests became violent. This resulted in Cruxis releasing the "wrath of god" upon the city, and it is now known as the Triet Ruins, while a new Triet was built nearby. The Seal of Fire is still located in the ruins, however, and the event eventually came to be known as "Efreet's Hellfire". Another of Sylvarant's failed Chosen was Aithra, Sylvarant's sixth Chosen. She was Phaidra's older sister and embarked on her journey around 70 years prior to Colette's in the story. Cruxis considered this particular journey a routine and did not take it seriously, predicting that the following Chosen would have a better chance of matching Martel Yggdrasill.

During Aithra's third trial, she failed to bond with her Cruxis Crystal and lost her sanity as a result. At the final seal, Aithra was restrained with rope to force her to cooperate, but one of the priests cut the rope in an attempt to save her. This priest was later revealed to be a half-elven boy Aithra saved during her journey. Not realizing Aithra would be killed until he heard Remiel's speech, he acted to avoid witnessing his savior be killed. In this moment, Aithra briefly regains her sanity long enough to attack the other priests. However, she dies in the struggle, and Remiel kills the remaining priests and half-elven boy. In Sylvaranti legend, it is believed that Aithra was killed by Desians. After Aithra's death, Phaidra was named Chosen, marrying as the Oracle instructed. When she gave birth, her daughter then assumed the title but did not venture on the Journey of Regeneration. Rather, she was instructed to marry Frank Brunel and eventually gave birth to Colette, who assumed the title and embarked on Sylvarant's next Journey of Regeneration.

In the story, Tethe'alla is the flourishing world, which serves as a symbol of a previous, unknown Chosen's success in the past, following Spiritua's success. Due to his or her completion of the journey, the only person subsequent Chosen are obligated to obey is the King of Tethe'alla, making him or her the second most powerful person in Tethe'alla. Due to Sylvarant's multitude of failed Chosen, Tethe'alla's Chosen is able to enjoy the prosperity of his or her world without the need to embark on the Journey of Regeneration. Also, because the status of Chosen is more casual in Tethe'alla, the title seemingly is bestowed upon the eldest child, regardless of sex. In the story, Zelos tells Lloyd Irving that his father's lover attempted to kill him, for if he were dead, his half-sister would become the Chosen instead. As a precaution, however, relatives of the Chosen are forced to live in isolation so that, in the case a disaster strikes, there is a greater chance of having someone to assume the title.

Dawn of the New World

In Tales of Symphonia: Dawn of the New World, the Chosen's worth is gradually decreasing, as the need of one no longer exists, and rumors of the Chosen abandoning each of their lands has spread across the world. However, the two last Chosen from each world are known throughout the reunited world, though Colette is the only one of these two still called the Chosen of Regeneration. The Vanguard hunts the remaining Chosen in order to obtain their Cruxis Crystals.