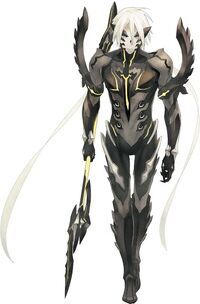 Chromatus (骸殻, Gaikaku?, "Corpse Shell") is the power used by the Kresnik family in Tales of Xillia 2. It was granted to the family by the primordial Great Spirit Chronos when they forged the pact known as Origin's Trial. Chromatus is the only known power used to destroy fractured dimensions; however, those who abuse the chromatus and give in to their desires become divergence catalysts, the cores of the fractured dimensions.

The chromatus is a double-edged sword: powerful, yet also dangerous. It encases the Kresnik's body in armor and boosts their capabilities, even granting them access to new artes, and in the case of Ludger Will Kresnik, bestowing the user with a new weapon. The user of chromatus will send the enemy to an alternate space, and for a limited time, they will have unlimited HP and TP. Every time the user takes damage, the time limit in which they can maintain chromatus will decrease. Depending on the chromatus's form, the Kresnik using this power can use a new mystic arte, or an enhanced version of one.

However, the chromatus is not a power that can be used carelessly. According to Chronos and Victor, the fractured version of Ludger, if one overuses the chromatus, he or she will eventually become a divergence catalyst, thus creating a new fractured dimension. There are ways to avoid this, such as using a medium to carry the burden. An example of this would be the relationship between Ludger and Elle Mel Marta. When Ludger grabs Elle in an attempt to flee from an Exodus agent while she is holding his pocket watch, she becomes the medium, thus whenever Ludger uses chromatus, Elle suffers its effects instead of him.

Another unique characteristic about the chromatus is that it is possible to increase its power by using multiple pocket watches, as it is the means to access it. So far, the only people to use this method are Ludger, Victor, and Julius Will Kresnik, Ludger's brother. A Kresnik can also form a direct pact with the watch, allowing him or her to wield even greater power; however, the risk of this person becoming a divergence catalyst becomes much higher than normal in doing so. An example of this is when Ludger forges a pact with Victor's pocket watch after his is destroyed by Bisley Karcsi Bakur. Ludger only transforms three times before becoming a divergence catalyst: the first being during his battle with Bisley, the second being to threaten Bisley from bringing harm to him or Elle, and the third being to sacrifice himself to save Elle.

As mentioned by a member of Spirius Corporation, there are only a few members of the Kresnik clan who can use the chromatus; however, only five have been shown using chromatus. They are:

It should be noted that the chromatus's form is shown in four levels. The first level covers only the limbs of the user, with the second level enveloping the torso, and the third level covering the entire body, save the head. Julius achieves a level 3 chromatus and Rideaux a level 2. Only Ludger, Victor, and Bisley achieve a level 4 chromatus, also known as a complete chromatus.