View source
watch 02:52
Roblox: DeepWoken - The Loop
Do you like this video?
Play Sound
"Claire" redirects here. For the crossover character who makes an appearance in Tales of the Rays, see Claire Victorious.

Claire Bennett (クレア・ベネット, Kurea Benetto?) is the main heroine of Tales of Rebirth. Although she serves as a protagonist in the game, she remains absent for a large portion of the story due to being abducted. Prior to her rescue, there are a few instances that provide insight into the events surrounding her, appropriately named "Claire Side", which accompanies the group's endeavors, named "Veigue Side". Claire does not possess any Force.

When Claire was young, her family took Veigue Lungberg in when he was a child. A year prior to the events of the story, Claire was frozen in a prison of ice when Veigue's Force went "berserk" as a result of the Dusk of Ladras. She remained frozen in the meeting hall of Sulz, where Veigue watched over her daily, hoping for a miracle. Eventually, Mao and Eugene Gallardo find Veigue in the meeting hall and claim they have come to recruit him because of his power.

Veigue's reluctance initiates a scuffle with Mao, who afterward uses his Force of Fire to melt the ice surrounding Claire, freeing her unharmed. Claire emerges from the ice, unaware of what happened a year prior and only recalling the blue light from Veigue's body that engulfed her. After warming herself in the sunlight, Claire formally meets Mao and Eugene, as well as shares an awkward yet relieved moment with Veigue. Although Veigue expresses his guilt for the incident, Claire realizes she must return home to her mother and father.

The pleasant reunion with Claire's parents is ended abruptly when a commotion occurs near the meeting hall. Everyone rushes there to find Tohma of the Four Stars accompanied by soldiers of the King's Shield terrorizing female Huma girls. Tohma orders the villagers to bring him the most beautiful Huma girl in the village, claiming he cannot decipher for himself due to his distaste of Huma. He then focuses his attention on Monica, a Huma girl, who looks toward Claire and gives Tohma the impression that Claire is the most desirable of all the Huma girls in the village. The soldiers seize her, prompting Veigue, Mao, and Eugene to fight Tohma and exhaust their energy. Saleh, another member of the Four Stars, then appears and forces the group to withdraw their hostility, leaving Claire to be taken.

At some point prior to the group arriving in the port town Minal, Claire was taken there and treated for a minor wound at the local inn by Doctor Curia. She leaves Curia with a message telling Veigue not to board a boat. Later, the story shifts to "Claire Side", in which consoles the other abducted Huma girls in Babilograd, becoming their beacon of hope. Despite her confident exterior, however, Claire is just as concerned as the others. When Claire arrives in Balka, it is not long before she is chosen to speak with Queen Agarte Lindblum in Balka Castle.

Agarte's adviser, Zilva Madigan, escorts Claire to the throne room, where Claire carries a calm demeanor despite her inner nervousness. Agarte carries a longer-than-usual conversation with Claire, intrigued by her views on race. When Agarte attempts to swap bodies with Claire, she succeeds briefly and claims that Claire will be the one who will "redeem" her. Not long after these events, Agarte prepares for the ceremony at the ritual dais atop Balka Castle. There, with Claire nearby, Agarte prepares for the ceremony by chanting to the Divine King. Agarte's body is then bathed in light, and Claire is imprisoned in a glowing moon, which prompts Veigue to force his way into the ceremony.

Zilva has him seized, but he is forced to witness Agarte envelop herself in the moon only to lose control of her power and scream for Zilva's help. The Divine King then appears, introducing himself as Geyorkias, King of the Sacred Beasts. After fighting Geyorkias and seemingly managing to overcome him, the group finds that Agarte is missing, presumably dead, and Claire is unconscious nearby. It is later revealed that Agarte managed to swap bodies with Claire, though Agarte keeps this information secret throughout a large portion of the story, and Claire is not shown again until later, having washed ashore on a beach near Razilda and discovered the transformation for herself.

Claire is a beautiful young woman with fair skin, green eyes, and long blond hair. Her simple yet elegant attire consists of a velvet and purple dress with matching heels. Personality-wise, Claire is mostly reserved and modest, though she does seize the opportunity to speak her mind when the situation concerns her convictions. She is kind and has a tendency to defend others when she perceives they are being unfairly treated.

Late in the story, when Claire joins the group in Agarte's body, Veigue struggles with discerning the two in his mind, which results in Claire leaving Veigue and returning to Balka in order to act as Agarte, proving her selflessness. Although Claire is concerned that she may never return to her body, she is able to accept it more than Veigue and never allows others to witness this concern. Ultimately, Claire proves to be more level-headed than Veigue and often guides him to understanding things outside his comfort zone. 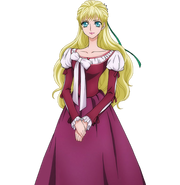