Clint (クリント, Kurinto?) is the leader of the Hunting Blades and a minor antagonist in Tales of Vesperia. The members of the guild refer to him exclusively as "Boss" or "Chief".

Like many members of the Hunting Blades, Clint bears a personal grudge against monsters. In Caer Bocram, Yuri Lowell and the group spot Clint and and his guild members battling a large monster, which Clint quickly dispatches easily with a Fatal Strike, unknowingly teaching the company how do perform it themselves from that point. Later, when he attempts to slay Gusios, the Entelexeia absorbs too much aer, causing it to go berserk, forcing the arriving Brave Vesperia to kill him. When Gusios is turned into an apatheia, Clint gets up in an attempt to crush it. He then reveals that his family was killed by Entelexeia during the Great War ten years prior to the events of the story. Due to the Entelexeia's appearance, he does not differentiate them from ordinary monsters. The party scolds Clint for lashing out in hate instead of letting go of the past, especially when the Adephagos currently threatens the world.

Clint can be fought in the PlayStation 3 port of the game. In battle, he possesses an aggressive fighting style, similar to Tison, but with more powerful and damage-inducing artes. His primary strength lies in his unique ability as an enemy to perform Fatal Strikes on party members, killing them instantly. 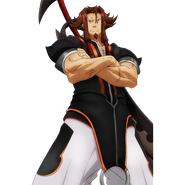