Coda (コーダ, Koda?) is a supporting character who accompanies Illia Animi in Tales of Innocence.

Coda is introduced when Ruca Milda accidentally bumps into Illia in Regnum, spurring the events that follow. When Ruca asks what kind of creature is, Illia explains that he is a Muse (ミュース, Myusu?) and she was forced to take him along. Upon exiting Regnum for the first time, Coda functions as the game's explanation system, informing Ruca of all the game's controls, about which Illia remains clueless. Illia later explains that Coda is an animal that lives in the area near Sania Village and ended up following her.

She states that Muses dig holes in the prairie and live in them, which can be problematic for horses, as they slip into the holes and fracture their bones. To prevent this, Muses are captured so they cannot breed. Illia explains that Muses are quiet, making them easy to raise, but that they have an excessive appetite. She later states that Muses live in groups and are highly resistant to hunger and thirst. Their hunger only grows if there is food to eat, resulting in Coda's gluttonous behavior. In Sania Village, Muses are given small tasks to do in exchange for food and are often kept as pets.

In actuality, Muses are the descendants of a god who was once the guard of a food store in Ratio, which is why Coda is able to speak in words. However, because the god ate the food in the storage, he was transformed into the current Muses on Naraka by the Earth Mother God (大地母神, Daichiboshin?), Inanna's mother. This was intended to be only a temporary punishment, but the god insisted he was "tired of heavenly food" and remained descended upon the earthly plane by his own will.

Coda is a small, rodent-like creature who is frequently teased with names like "rat" and "monkey" from Spada Belforma. He has green eyes and hair, as well as large ears and a small tail. His attire consists of a pink outfit and red jacket with long sleeves that extend over his hands. He also carries a yellow bag that matches his shoes. Personality-wise, Coda is often insulted when people wonder what type of creature he is, resorting to descriptions like "thing". However, he is mostly lively and almost always takes advantage of free food. Hermana Larmo often joins him in talks about wanting food, brightening even depressing conversations with their energetic moods. Coda has a tendency to end pieces of his dialogue with the verbal tic "I say". 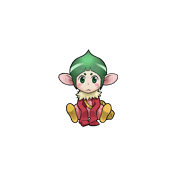 Coda appears in Tales of the World: Radiant Mythology 3 and operates the item shop on the Van Eltia. Throughout the story, he requests the Protagonist to find recipes in several dungeons. Like most of the other creature-based characters, Tear Grants finds him cute. After the main story, the Grade Shop is opened, and a similar-looking Muse named Ada operates it.