Creed Graphite (クリード・グラファイト, Kuriido Gurafaito?, "Kreed Grafyte"), also known as the "Scarlet-Haired Devil", is the main antagonist in Tales of Hearts. He is one of the last descendants of Minera, and the master of Incarose.

Prior to the events of the story, Creed grew along with friends Fluora Spodumene and Lithia Spodumene in the Mineran city of Cind'rella during a period of unending Mineran Will wars. Considered as a prodigy in the use of Will Artes, Creed was considered a genius, second only to Fluora. To stop the endless conflicts that ravaged Minera, Creed took part on a plan alongside with Lithia to remove the war-like components from a person Spiria: a plan that would receive the codename "Savior System Gardenia".

To that end he created Incarose, a mechanoid that would assist him during his experiments. Fluora warned multiple times and questioned the unethical manipulation of someone else Spiria to both of them. Despite all the warnings Creed and Lithia managed to activate Gardenia using Lithia's Spiria as the core for Gardenia. However, Lithia was unable to control Gardenia, causing every Spiria on Minera to be consumed by Gardenia and calcifying the entire planet in the process.

To stop Gardenia, Fluora sacrificed herself in order to protect both Creed and Lithia. Againts Creed's wishes, Lithia managed to seal Gardenia alongside with Fluora. Such action caused animosity toward Lithia, as Creed opposed Lithia's decisions by insisting that he holds the ability to return the Spirias devoured by Gardenia and save Fluora. Unable to reach into an understanding, Lithia proceeded to seal Greed with an arte, failing in the process. The arte bounces to Creed and Lithia, causing their Spiria to be expelled from their physical bodies.

Since Mysticete had meanwhile landed on Organica, both proceeded looking for a host in whose Spiria they could nestle. Having expelled each other Spirias from their physical bodies, both existed within Organican hosts during two millennia. Changing host over countless generations, Creed waged a secret and endless battle for control over Gardenia against Lithia. Together with Tekt Tourmaline, Labrodor Akerman, Sydan Meteor, and Kardia Meteor battled Zirconia Tourmaline. During the battle, Both Iola Hearts and Zirconia shattered, forcing both Lithia and Creed to seek for a new vessel. Creed was forced to to retreat to Kardia's unborn child's Spiria. Kardia took the opportunity and managed to create a seal that forced Creed to rest inside the child's Spiria in the coming years.

While he is fighting, he casts spells at separate heights and attacks with his claws. Additionally, he can create a dark-formed replica of any party member's Soma to use temporarily. He is also able to change his primary element without a necessary pause. 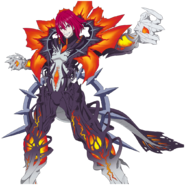 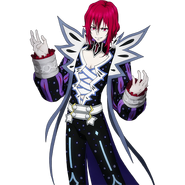