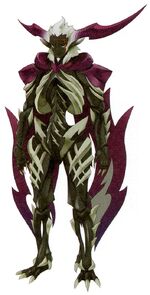 A daemon (業魔, gouma?, "karmic demon") is a type of creature in Tales of Berseria. They are known as hellions in Tales of Zestiria.

Humans, animals, and even objects, affected by the daemonblight turn into monsters called "daemons". While most daemon-turned humans go berserk, some retain their sense of reason. The form that a creature affected by daemonblight will assume is hard to predict, but humans will often turn into lizards or werewolves. In actuality, daemonblight does not exist, being a term coined by the Abbey since anyone can become a daemon if malevolence, otherwise known as the impurity or darkness in a human heart, overflows them. If such information got to the public, it would result in mass hysteria, as well as mass transformations into daemons. Opening of the gate from ten years prior to the events of the story resulted in humans being able to see daemons. There exist various species of daemons, such as therions, who feed on others to gain strength, and yaksha (夜叉, yasha?), also known as war daemons.

v • e • d
Lore for Tales of Zestiria and Berseria
Community content is available under CC-BY-SA unless otherwise noted.
Advertisement