Dalis Vincent (ダリス・ビンセント / ダリス・ヴィンセント, Darisu Binsento / Darisu Vuinsento?) is a minor antagonist and later a supporting character in Tales of Destiny. He is Mary Argent's husband, who plays a vital role in her backstory of recovering her memories.

The group stops in Cyril on their way to the Phandarian capital of Heidelberg to overthrow Lydon Bernhardt. Almost immediately upon entering, a pair of soldiers interrogate the group only to recognize Mary, whose memories are still lost to her. One of the soldiers claims to have fought alongside Mary, as well as the he and her other former comrades assumed she had died. They then leave to retrieve their captain only to have Dalis approach them and notice Mary for himself. He begins to say her name but stops himself before telling his soldiers that they are mistaken. To the soldiers' confusion, Dalis then orders them to return to Heidelberg and informs the group that they should leave the country.

Mary attempts to stop Dalis from leaving, but to no avail. A woman then approaches Mary and recognizes her as well, mentioning her abandoned home and how Lydon has usurped power in the region. The group makes their way to Mary's house, where a flood of memories return to her. She recalls that Dalis is her husband and the sword in her possession is his. Mary then mentions a revolution that occurred two years prior, in which she fought alongside Dalis, but that their militia was defeated. She and Dalis fled but were pursued, so Dalis allowed Mary to escape alone, while he was captured. As a result of the shock, she developed amnesia.

When the group infiltrates Heidelberg Castle, they find Dalis waiting for them. Mary tries once again to speak and reason with him, but he instead draws his sword, engaging the group in battle. Once defeated, Dalis begins to drop his guard, commenting on Mary's steadfast beauty. He then explains that he has been trying to pave a new path for Phandaria, but King Sark had opposing views. Dalis led the rebellion that took place two years prior, and the country's military put an end to it. He was imprisoned to atone for his crimes, giving him ample time to reconsider his actions.

However, when Lydon came, Dalis found a way again. Unfortunately, Lydon had radical plans that caused Dalis to doubt his actions once more. He apologizes to the group, but Garr Kelvin draws his sword, preparing to kill Dalis, who claims to be ready for any consequence. Mary begs Garr to stop, and he withdraws, telling Dalis to leave. Dalis accepts this, and Mary asks the group if she can leave with Dalis as well, to which they agree is best. Mary thanks the group for their kindness and expresses her belief in their victory against Lydon before leaving with Dalis.

Dalis is later shown after Lydon's defeat with Mary in their home as she nurses him back to health. Three months after these events, the group encounters Dalis and Mary in Frostheim, and Mary explains that they are out because Dalis thinks it will be good for his wounds. When the group explains that the Eye of Atamoni has gone missing again, Mary considers accompanying then, but Stahn Aileron insists she stay with Dalis to continue caring for him. As the group prepares to leave the port town, Dalis urges Mary to go with them, citing her worry over the situation at hand. Mary hesitates, but Dalis expresses his happiness to have her by his side again and wants to return the favor by letting her journey with her companions again. Mary accepts this and raises her weapon with Dalis to signify their eternal bond before leaving with the group.

Later in the story, after the group has defeated Hugo Gilchrist and is planning a course of action to take against Kronos, Dalis visits the Seinegaldian capital of Darilsheid to inform Garr that the Flying Dragon Lydon used has been repaired and is outside the city. This opportune moment provides the group with good news during a time when they are struggling to renew their hope in the situation at hand. 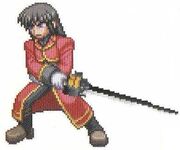 Dalis is a humble, handsome man of great integrity who feels strongly about his country. He has light-brown eyes and long black hair, and his attire consists of a red and black military uniform that denotes his high-ranking status in Cyril. His ambition leads him to ignite a rebellion against Phandaria's monarchy, as he does not share the same views as King Sark. When his actions result in his capture and Mary's disappearance, however, he reconsiders his beliefs, ultimately returning to them once he is released from prison and Lydon usurps power in Phandaria. Dalis also cares deeply for Mary and was tormented by the uncertainty of her safety following the rebellion. When he reconciles with her, he rediscovers the happiness she once gave him.