Aselia Wiki
Register
Don't have an account?
Sign In
Advertisement
in: Dist, Tales of the Abyss characters, Major Antagonists
English

Dist the Reaper (死神ディスト, Shinigami Disuto?), birth name Saphir Ortion Gneiss (サフィール・ワイヨン・ネイス, Safiiru Waiyon Neisu?, "Saphir Wyon Gneiss"), who refers to himself as "Dist the Rose" (薔薇のディスト, Bara no Disuto?), is a God-General and major antagonist in Tales of the Abyss. He is also called "Dist the Runny", a title mockingly conferred upon him by Jade Curtiss in reference to the fact that his nose supposedly runs when he is upset. He holds the ranks of Conductor and Locrian Colonel, as well as 2nd Division Commander within the Oracle Knights.

Saphir was born in Keterburg in N.D. 1982, the same year as Jade. He was childhood friends with Jade; Nephry Osborne, Jade's sister who was then known as Nephry Balfour; and future emperor of Malkuth, Peony IX, all of whom later attended Professor Gelda Nebilim's private school in Keterburg. Jade performed an experiment in N.D. 1994, attempting to use the Seventh Fonon, but he failed, setting the school ablaze and killing Nebilim. Afterward, on the outskirts of town, Jade attempted to revive the professor using fomicry, but he instead created a monster replica.

In N.D. 1996, Saphir and Jade entered Grand Chokmah's Military Academy together, focusing on fomicry research and eventually graduating from the academy. Obsessed with fon machinery, Saphir would aid Jade by building machines to create replicas. When Jade banned fomicry research in N.D. 2004, he distanced himself from Saphir, who continued the experiments. Saphir joined the Oracle Knights in N.D. 2009 and later served under Van Grants. Eventually, he became one of the six God-Generals and changed his name, including altering his middle name to Ortion, by which the Ortion Cavern would later be named. Unlike the other God-Generals who joined Van because of his ideals, Saphir joined Van so that he could continue his research. He remodeled a mechanical doll known as Tokunaga for Anise Tatlin in N.D. 2015.

Dist longs for the resurrection of Nebilim, his former professor, doing everything in his power to revive her. He even switches alliances and works with Grand Maestro Mohs in a failed attempt to acquire Nebilim's replica data. Primarily serving as the comic relief villain, he often throws tantrums and is responsible for saying various, outrageous quotes, many of which only further expound his personal vanity. Throughout the events of the story, he proves to possess a more sinister side to him, serving the role of a mad scientist and performing immoral experiments, giving little thought to what harm they may cause. In the end after several events, Dist is arrested in Grand Chokmah.

Dist is a narcissist with a flamboyant sense of style, as shown by his ostentatious, flying chair and unique collar, and he possesses both an affectedly soft yet haughty voice to match his vain personality. His blind dedication to the cause of reviving his childhood instructor illustrates a stubborn inability to let go of the past.

In Tales of the Rays, Dist fights in his chair. His artes are all unique, from summoning random enemies to fight for him, to launching missiles that can harm party members if hit with them, making him unpredictable on the battlefield. In this game, one of his mirrage artes features D-Buster, which was absent in Abyss. In other mobile games, Dist only uses two strike artes used by Kaiser Dist RX: Blast Strike and Twin Laser. 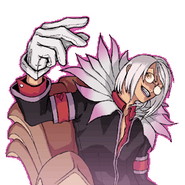 First cut-in image for D-Buster in Tales of the Abyss. 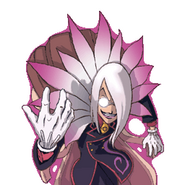 Second cut-in image for D-Buster in Tales of the Abyss. 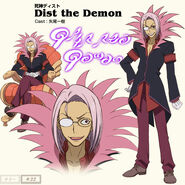 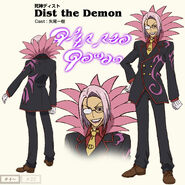