Duke Pantarei (デューク・バンタレイ, Dyuuku Bantarei?) is a major antagonist in Tales of Vesperia. Considered to be a hero from the Great War, Duke saw the barbarism of humankind and eventually lost faith in humanity. Due to this, he becomes an ominous, recurring figure throughout the story who both helps and hinders the protagonists.

Duke wields the lost sword, Dein Nomos, which is able to control the flow of aer, and is proof of imperial lineage. Early in the story, he is briefly encountered by Yuri Lowell and his companions numerous times in different locations, during which he briefly talks with Yuri before leaving. He is officially introduced to the group by Raven after using Dein Nomos to neutralize an aer krene in Keiv Moc. Later in the story, when Yuri and his friends are trying to rescue Estelle from Alexei Dinoia, he hands this sword over to them in hopes that he will fight for identical goals and because they are the only other people besides him who are willing to listen to the Entelexeia.

However, Duke eventually feels their goals do not coincide and reclaims the sword. This change of heart occurs when the barrier of Zaude is destroyed and the Adephagos once again threatens the world. Duke then resurrects Tarqaron with the intention of trading all human life, including himself, for the destruction of the Adephagos. Yuri and his companions resolve to put a stop to his plans by offering all the blastia in place of humanity. Duke, however, longs to return the world to the rule of the Entelexeia as recompense for the slaughter of Elucifer, and fights against Yuri and his companions, serving as the story's "final boss". After Yuri and his companions prove victorious, Duke is finally persuaded by their perseverance and assists them through the aid of Dein Nomos, destroying the Adephagos.

When fought, Duke floats mid-air while telekinetically wielding Dein Nomos. When he has accumulated a certain amount of damage, he will recover from being staggered, vanish, and reappear somewhere else, making it impossible to set up combos with him. Duke has three different forms when fought, and in each one, he gains more artes, most of them originally belonging to the protagonists. Each of his artes have a chance to inflict a random effect. In his second form, Duke gains seven small blades that he can also telekinetically wield. He can also use the mystic arte Big Bang to bring the entire party's HP down to one, forcing them to work on healing before being able to continue. This limit is removed depending on how high the set difficulty is. If the party manages to gather all of the Fell Arms before the fight, Duke will use their power to enter his third form, known as the Radiant Winged One (虹翼まといし者?). In it, Duke gains access to the mystic arte Brave Vesperia. Unlike Big Bang, he can use this arte to knock out any of the party members. 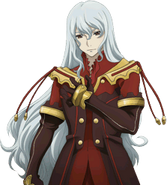 Status image in Tales of the Heroes: Twin Brave.

Cut-in image for Tales of the Heroes: Twin Brave. 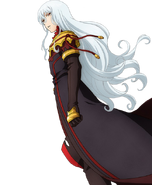 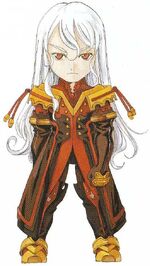