Aselia Wiki
Register
Don't have an account?
Sign In
Advertisement
in: Races, Tales of Phantasia, Tales of Symphonia
English 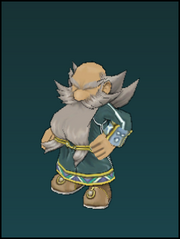 Dwarves (ドワーフ, Dowaafu?) are a humanoid race in the Aselia timeline of games, notably Tales of Phantasia and Tales of Symphonia.

Dwarves typically live in caves and earthen holes, and it is stated that those who do not lose part of their craftsmanship abilities. Their technology is applied to create many useful items, such as Key Crests, which inhibit the negative effects of Exspheres in Tales of Symphonia. Physiologically, dwarves are much smaller than ordinary humans, and like elves, they have pointed ears. In contrast to elves, however, dwarves are notably rather muscular and stocky. Highly skilled in craftsmanship, they pass their dwarven technology down through their generations, with their innate talent being assumed to lie in their blood. Dwarves do not appear directly in Tales of Phantasia, but they are mentioned. The Morlia Mineshaft is a large, profound remnant of dwarven culture.