Edna (エドナ, Edona?) is an Earth seraph in Tales of Zestiria and the younger sister of Eizen from Tales of Berseria. She distrusts humans and behaves mostly apathetic, but will become emotional when the situation involves her only living family member, her older brother. Her true name is Hephsin Yulind (ハクヂィム＝ユーバ, Hakudimu Yuuba?), meaning "Early-Bloomer Edna".

Edna has fairly short blond hair, which becomes a brighter yellow toward the tips. There is a black-headband in her hair, and her side ponytail is tied with a green ribbon. She has blue eyes, and on her neck, she wears a black-ribboned necklace with a small, hanging jewel. Edna wears a short yellow and white dress with a big flowery bow on the back. She also wears a single brown glove wrapped in the same ribbon used to tie her hair on her right hand. She has big brown boots with buckles and yellow ribbons wrapped around her legs. She uses her umbrella to protect herself.

While acting and looking apathetic, she likes teasing people, especially Mikleo and Rose. Edna also displays the ability to overpower stronger hellions through intimidation, causing them to cower in fear. She also easily becomes blasé and has a tendency to sound bored when attacking low-level enemies.

Edna fights with her umbrella, which represents Earth's dominance over Water, and is able to perform seraphic Earth artes. Edna's artes primarily consist of using rocks, complementing her status as an Earth seraph. She is also able to combine the element of Water with Earth to create snow-like powders and shoot projectiles made of ice, as well as combine Wind with Earth to create voids and gravitational fields, using her umbrella as the catalyst for her attacks.

Edna also has the ability to cast artes that have a delayed reaction to them, such as Rock Trigger, Gravitrigger, and Quake Trigger. These artes are activated by certain hit counts achieved either by herself or with her allies, making it useful if the player wants to increase their hits against an enemy. Because Edna has a petite exterior, she has admitted she cannot carry weapons heavier than her with the possibility of straining herself if she tried to use Giant's Strength, her map action. Thus, the umbrella is her choice of weapon. Despite her small frame, however, Edna possesses a high defense stat and can cast Barrier to assist others. On her own, Edna has two mystic artes: Terra Mine and Shooting Stars. She gains a third mystic arte, Earth Revolution, when she is armatized with either Sorey and Rose. 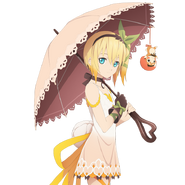 Status image in Tales of Zestiria.