Eephon (イーフォン, Iifon?) is the Sacred Beast of Darkness in Tales of Rebirth. He is a large, green beast with features of a lion and the build of a centaur.

Eephon is one of the six Sacred Beasts, known as the "Six Saints", who served the Sacred Beast King, Geyorkias, long before the events of the story. Each Sacred Beast possesses an arcane power, Eephon's being Darkness. At some point in the past, the King and his Six Saints came into conflict over opposing ideals: Geyorkias believed they should eradicate all Huma from the world so that the racism and hatred between them and their fellow race, the Gajuma, would cease, as Huma had undergone a marked cultural development and waged war against the Gajuma in an attempt to subject them to the Huma's rule.

The group visits Eephon's shrine in search of the "Power of Darkness", which refers directly to Eephon's power of the element Darkness. Outside the shrine, Eephon's voice booms seemingly from out of nowhere, questioning why the group wishes to obtain the power of Darkness. Eugene Gallardo explains that they are attempting to purge the world of the negative impression that currently plagues it, causing strife between Huma and Gajuma. Eephon claims that the impression has nothing to do with the animosity that has always existed between the races, as well as that the world shall not see an end to this animosity unless one race is eliminated.

Tytree Crowe then speaks up, stressing how Huma and Gajuma are the same and rejecting the notion that race has anything to do with the world's current state. Eephon challenges Tytree to come before him and unveil his convictions, leaving the group to follow Tytree into the shrine, Tytree having been selected for the trial. Inside the shrine, Tytree experiences a series of hallucinations that fail to affect the rest of the group. In these hallucinations, Tytree is in his hometown of Petnadjanka, where the Huma factory workers mistreat and punish the Gajuma workers, Tytree's boss and sister being among these Huma.

After saving a Gajuma man, Tytree is shocked when he discovers that the Gajuma workers have started a riot, and during this riot, Tytree's sister is killed by the Gajuma workers. Tytree manages to overcome the trial by remaining firm in his beliefs that one's emotions and feelings hold a far greater significance than one's race, which he believes does not define a person. In the final room of the shrine, Eephon appears and introduces himself, impressed by Tytree's resolve. He then tests the group in combat before bestowing his power of Darkness to Tytree. Eephon warns the group of the impression's threat before telling them that the power of the Sacred Beasts will help them understand how to purify the impression. 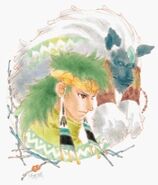 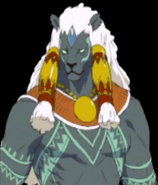