Efreet (イフリート, Ifuriito?) is the Spirit of Fire, also representing one of the four cardinal elements of the Tales games. Efreet has appeared in several games of the series as a character or cameo, and he is able to be summoned through the Efreet arte. Efreet is opposed by Undine, the Spirit of Water, and in certain games Celsius, the Spirit of Ice. In Tales of Rebirth, Efreet is replaced by Fenia, the Sacred Beast of Fire. In Tales of Graces, he is replaced by the Spirit Bloodflamme. Initially appearing as a wispy flame creature, Efreet has evolved into more of a crimson giant.

Efreet makes his first appearance in Tales of Phantasia as a Spirit. Efreet is the Fire Spirit and appears as a ghost-like creature made entirely of flame. Found in the Cave of Burning Sand, he is one of the first four Spirits the party must face before they can meet Maxwell, the "Lord of the Four Elements". A gruff creature, he tests the party and is pleased with the results. Efreet requires the "Garnet Ring" to forge a pact, granting Claus F. Lester with the power to summon him in battle with the Efreet arte. In battle, Efreet attacks with punches and throws out fireballs.

Efreet appears in the PlayStation release Tales of Destiny as a special attack that can only be summoned through the consumable item "Efreet", which is described as an ancient weapon capable of calling forth the fire spirit. An Efreet parody called "Jifneet" also has an appearance in the PlayStation 2 remake of the game, where the "Gentlewakame" (ジェントルワカメ?) enemy will summon it when his Break Gauge reaches 100% in an arte called Jifneet (自負ニート, Jifuniito?).

Efreet appears in Tales of Eternia as one of the Greater Craymels and one of the Primary Craymels of Inferia. The Fire Craymel governs the use of all Fire-elemental spells. Efreet's home is the Efreet Gorge. Proud and haughty, he looks down on humans and considers his duties as a Greater Craymel to be more important than humans. Disgusted by Efreet's unwillingness to help, Undine forces him into the Craymel Cage, where the three Primary Craymels together summon Rem. Much like how Undine helps the party combat the intense heat of his domain, he in turn protects the party from Mt. Celsius's bitter cold. His appearance calls Celsius, who attacks out of fear and insanity. Efreet can be summoned through the Efreet arte. In battle, Efreet attacks mainly through his fists, slamming them down like hammers. He has access to fire-based strike artes as well as a plethora of Fire-elemental Craymel Artes. Merely getting too close to Efreet causes minor fire damage upon contact as well.

Efreet makes a cameo appearance in Tales of Destiny 2 in the mystic arte Flam Brave. 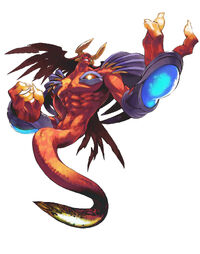 Efreet, the Ruler of Hellfire, appears in Tales of Symphonia as one of the Sylvaranti Summon Spirits. He appears as a large, powerful entity. Residing in the Triet Ruins, he is the Summon Spirit of Fire. He is able to be summoned through the Summon: Fire (降霊召符・火, Koureishoufu: Hi?) arte, which will display Efreet's name after the arte's name. 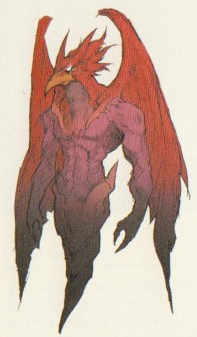 Efreet appears in Tales of Legendia as one of the Summon Spirits. He appears as a bird-like entity, similar to that of a phoenix. Efreet makes his first appearance at the end of Will Raynard's character quest as a glowing ball of light only Grune can see. Acknowledging the role the immaturity of the world has on both Grune and his power, he then rests in Grune's urn as a seed, at which point Grune plants it in the Waterways. At the end of the story, Efreet is born from this seed as one of the Summon Spirits bequeathed onto the world. Given his nature in other games, he is associated with the game's Fire element.

Efreet is mentioned in Tales of the Abyss as the aggregate sentience of the Fifth Fonon, the Fonon of Fire. Unlike most games, Efreet goes by two names in this game, one of which is the name Ifrit, a viable alternative, and the other, Efreet. Ifrit is mentioned in one of the texts of the library in Daath, with the name used to represent the third day of the week, Ifritday, within the world of Auldrant, as well as the fifth and eight months, Ifrit Decan and Ifrit Redecan. In addition, Jade Curtiss can obtain a spear named "Efreet". 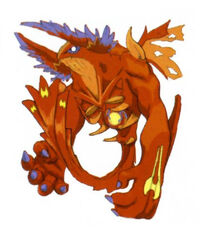 Efreet appears in Tales of Vesperia as a Spirit. After the Entelexeia Phaeroh dies at Phaeroh's Crag, the party uses his apatheia to turn him into a Spirit through the process of Spirit conversion. Estelle names him "Efreet", which means "Blazing One". Phaeroh's mistrust of humans is tempered as Efreet by his newfound sense of wonder for the world, though during a private conversation with his fellow Spirits, he does mention that if humans ever get out of hand again, he can always incinerate them. Efreet is as hotheaded as his element, but he is more alive than Phaeroh was. In the PlayStation 3 port of the game, Efreet makes an appearance in Estelle's mystic arte Ultimate Elements. Efreet opens the arte by burning all of his enemies in an inferno. 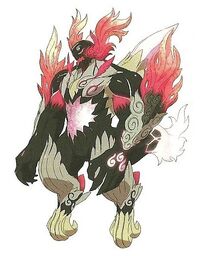 Efreet appears in Tales of Xillia as one of the Great Spirits under the personal control of the Lord of Spirits, Milla Maxwell. At the start of the events of the story, Efreet is imprisoned within the Lance of Kresnik, though he is eventually freed and comes to aid Milla.

Efreet reappears in Tales of Xillia 2 as a helper of Milla, acting faithfully under her command.

Efreet appears in Tales of Phantasia: Narikiri Dungeon as the Spirit of Fire and one of the twelve Spirits that must be fought during the Ordeal of Spirits (せいれいのしれん, Seirei no Shiren?). He is found on the final level of the Cave of Flame and is the boss of the dungeon. Upon defeat, he teaches Mell and Dio the heart of fire: Fighting Spirit (とうこん, toukon?).[1]

Efreet appears in Tales of Phantasia: Narikiri Dungeon X as a Spirit. In the story, Mell and Dio must collect his essence to save Vahalla City. Mell and Dio first encounter Efreet inside the Cave of Burning Sand in AC. 4203 while searching for Milard Rune. At the bottom of the dungeon, they find Efreet ready to attack Milard, but Mell and Dio intervene and defeat him. Upon defeat, Mell and Dio collect his essence. Efreet can be summoned by Claus by default, and he also appears in Claus's mystic arte, Tetra Leader.

Efreet appears in Tales of the World: Summoner's Lineage as a unit Fulein K. Lester can summon.

Efreet also makes an appearance in Tales of the Rays. Milla detects an abnormal spirit activity in the desert, and alongside Ix Nieves, Mileena Weiss, Cress Albane, and Chester Burklight, sets out to investigate it. Deep within a volcano, they encounter Efreet, who bears resemblance to Rieze Maxian Efreet. He makes a pact with Claus and also reveals some information about Aifread and Biqe Yalanda Odanse, with the most disturbing being that mirrages will result in the world's destruction, as per Sun Goddess Dana's warning. He also states that with more exoflections, the shackles binding other spirits weaken.