View source
watch 01:14
Tales of Berseria - Character Trailer: Eizen
Do you like this video?
Play Sound

Eizen (アイゼン, Aizen?) is a minor character in Tales of Zestiria and a protagonist in Tales of Berseria. He is the older brother of Edna. He is constantly referred to as the "Reaper" (死神, Shinigami?, "Death God"). His true name is Ufemew Wexub (ウフェミュー＝ウエクスブ, Ufemiyuu Uekusubu?), meaning "Eizen the Explorer".

In Tales of Berseria, Eizen is the first mate of the Aifread pirate group. Living by his own belief, he searches for his missing captain Van Aifread. Along the way, he meets Velvet Crowe and joins her to fight their common enemy, the Abbey. His knowledge and experience in the underworld greatly helps Velvet in her quest for revenge. Before his departure to become a pirate, he lived with Edna, but after a continuous streak of unfortunate events, Eizen realized that his domain causes misfortunes to those near him. Thus, he decided to go on a journey so Edna would not get involved in his "curse".

After Velvet seals Innominat, Eizen returns to the Van Eltia and continues to journey with Aifread's Pirates for the next 800 years. During the period known as the "Unprecedented Cataclysm", he clashed with the Lord of Calamity of that time. During their battle, he turns into a dragon and devours the Lord of Calamity, saving the world from disaster, an event that Zaveid witnesses. Sometime before this battle, Eizen, knowing what would happen to him, makes Zaveid promise that he will kill him if he becomes a dragon, so that Edna would not have to suffer. Afterwards, Eizen flies away disappearing for a time, but returns to Rayfalke Spiritcrest, where he lives in isolation. Eizen loses all traces of his original self and becomes a mindless dragon, devouring countless humans and seraphim and is no longer able to recognize his own sister.

During the events of Tales of Zestiria, Edna, having saved Sorey, Mikleo, and Lailah from Eizen, joins them on their journey, hoping to find a way to save Eizen. Zaveid, on the other hand, tracks him down to fulfill his promise to kill him; he only stops when he runs out of bullets to fire the gun that empowers him and then allows Sorey to try and find another path. Eizen's defeat is optional and only possible once Sorey has fought Tiamat and fully accepts that the only way to save a seraph that has fully turned into a dragon is to kill them. Once Edna and the others kill him, she allows herself to move on. His grave is placed on Rayfalke Spiritcrest's summit, where Edna and the others fought him.

Eizen is a tall, built man dressed in dark clothing. His blond hair and pale skin are similar to those of his sister, Edna. He dresses roughly and in black, reinforcing the "Reaper" epithet. His personality is that of cool and controlled individual, though he is passionate about artwork and antiques that runs counter to that aloofness. As an older malak, he also acts as a mentor to Laphicet. While he does kill, Eizen promotes the idea of free will and honors others for taking up their own path. He also despises those who would try to take control of someone else's life or tarnish their legacy, such as when the Abbey robbed most malakhim of their free will and tried to bend Aifread to their will, or when Melchior coerced Bienfu into being a spy, and resorted to illusions to fight. On his own sense of justice, Eizen promises to right the wrongs against those he cares for. That said, he cares for his sister, Edna, deeply. So much so that he ran away to protect her from his Reaper's Curse and had Zaveid kill him when he became a dragon to prevent him from hurting her.

Eizen fights up close using martial artes involving mana-boosted punches which can cover up to mid-range, though he can also use malak artes to strike from a distance that are centered on Wind and Earth as opposed to Magilou's focus on Fire and Water elements. His Break Soul is Draconic Drive, which sprouts dark wings that allow him to fly and release energy provided that one of the enemies within the Break Soul's range is afflicted with the "Stun" status ailment or is downed. The appearance and name foreshadow his eventual fate as a dragon. His mystic artes are Perfect Mayhem, which unleashes a flurry of punches in the time it takes for a coin to drop, Howling Dragon, and Venom Strike. He also shares a dual mystic arte with Rokurou Rangetsu known as Last Laugh.

In Tales of Zestiria the X, Eizen's fate is altered: he survives and is alive following Sorey's actions purifying Maotelus, and while still in dragon form, he regains his sentience and is hinted by Edna to eventually return to his true form.

In Tales of Crestoria, Eizen and his sister Edna came across a strange coin. Whenever Edna was angry, Eizen would let her hold onto it to calm her down. One day, the coin disappeared. No matter how hard he looked, Eizen could not find it until it abruptly reappeared the same day their parents took Edna and disappeared. Almost immediately, Eizen took off in search of them. During his travels, he started experiencing unnaturally good luck, winning absurd bets and terrible things happening to those who tried to harm him, earning him the "Reaper" nickname. He even tested this luck in an active battle and somehow survived. Eventually, Eizen learned of a pirate named Aifread, whose story of freedom inspired Eizen to become a pirate.

Ten years later, Eizen catches wind of a rumor that Aifread's legendary treasure was in Centerport. He heads there and finds a small group holding off several pirate crews, one of them being Vicious the Great Transgressor. Learning that the rumor was false, Eizen fights Vicious for mocking Aifread's legacy. Eizen's strength is enough to impress Kanata Hjuger, but Eizen and Vicious know that the other is holding back. Vicious urges Eizen to throw everything at him, saying that killing an enemy who is holding back is no fun. Eizen throws the Great Transgressor's words right back at him, and calls it a draw, considering the false rumor forgiven.

In his side-story, he is approached by Patty Fleur in Roka, who is well-versed in the rumors Eizen's powers have spread, but is even more intrigued by his coin that always comes up heads, considering it his invaluable treasure, though Eizen dismisses it as just a lucky charm he and his sister found ten years ago. After he explains how he found the coin, Patty tells him of a rumor that there is another "Reaper" cursed with bad luck. So much so, that they had to move to a remote snowy mountain. Patty leads Eizen through a field to a mountain in the south.

They eventually come a cross a house in the middle of nowhere. Inside, they meet Edna to Eizen's surprise. Edna explains that their parents died recently, and she wants nothing to do with him. Understanding, Eizen insists to stay by her side to make up for the time he was not. Attempting to reform their bond, Eizen shows how his luck can counter hers, but she just chalks it up to blind optimism. Wondering if his family has a dark secret relating to unnatural luck, Eizen asks Patty to learn more about the rumors circulating Edna as "the Reaper."

The next day, Eizen invites Edna over to her ship, which she accept cautiously. When a violent storm hits, Edna drops into the water to save her brother, only for a wave to knock him out. Eizen wakes up on the beach of Ednack. Then, he spots a note in the bag Edna left behind, from their mother. It turns out that when Eizen became fatally sick as a child, his parents sacrificed their good fortune to the spirits in return for his survival. However, his mother happened to be pregnant with Edna at the time. As a result, Edna was cursed with bad luck along with their parents. Patty arrives to tell Eizen that a girl called the Reaper has been captured, and brought to the local vision central. Desperate, Eizen and Patty rush to town, fighting through the guards. When they finally reach her, the villagers have already started the broadcast. However, the decision made by the masses is not unanimous, so her vision orb is unaffected. Unable to accept this, the villagers drag Edna to feed her to the Lake Beast. When it pops up, Eizen smacks it back down and breaks Edna free of her shackles. After a small conversation, the two agree to look for a way to lift their curse together. 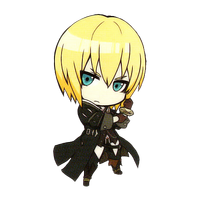