Aselia Wiki
Register
Don't have an account?
Sign In
Advertisement
in: Races, Tales of Phantasia, Tales of Symphonia, Tales of Link
English 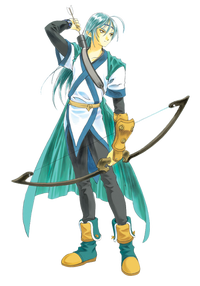 Elves are a humanoid race in the Aselia timeline of games, being featured notably and prominently in Tales of Phantasia and Tales of Symphonia.

Elves bear a strong resemblance to ordinary humans, apart from their pointed ears. They are capable of utilizing mana for spellcasting, which aids them well in combat, as it is stated that they can never reach the muscular stature of humans, typically being taller and more slender than humans. Archery is another combat style that elves have adopted. Elves are known to consider themselves the apex of evolution, indicated by their long lifespan, meaning they can hardly develop any further, and they tend to regard themselves as "finished". When an elf mates with a human, an act that is highly discouraged, the result is a half-elf, a race in and of itself whose members look identical to humans, but they wield the magical abilities of elves, even adopting their extended lifespan.

Elves originally lived on the comet Derris-Kharlan. At some point, Derris-Kharlan orbited a dead planet, and the elves decided to plant a Great Seed, bringing life via a World Tree to the lifeless planet, eventually known as Aselia. The elves migrated to the planet and lived together with the humans that had evolved there. Over time, the elves colonized certain rural areas and lived together hidden from the remainder of the world. They began to distrust humans and distance themselves from them, with interbreeding between the two races being highly frowned upon from both sides, as humans envied half-elven power and elves cursed the half-elves for possessing "tainted" human blood.

The first elven colony depicted in the series is Heimdall in Tales of Symphonia, hidden within the Ymir Forest and yielding the Torent Forest. In the distant future, during Tales of Phantasia, this geographical region remains the home of the elves via the Elf Colony, a village that serves as the border between this timeline's Ymir Forest and Treantwood, which the elves also refer to as "Heimdall".