Elize Lutus (エリーゼ・ルタス, Eriize Rutasu?, "Elise Lutus") is one of the protagonists in Tales of Xillia and Tales of Xillia 2. She is a young girl from the mountain village of Hamil in Auj Oule. Despite her age, she is a master of dark spirit magic and healing artes.

Elize was born in Undis of the Mon Highlands in the country of Auj Oule in the year Trames 2281. She is the daughter of Hubert and Ana Lutus. Hubert, a scholar, and Ana, a woman of lesser nobility, were originally from Rashugal, but had fled to Auj Oule because their parents did not approve of their marriage and obtained Auj Oule citizenship. When Jiao was still a fugitive of the Kitarl Clan and Elize was merely one-year-old, the Lutuses harbored him, and he lived with their family for four years.

Eventually, Elize's parents were killed by tribesmen who were trying to curry favor with Gaius. Jiao was unable to save their daughter, and for this, he felt he owed the girl a lifelong debt. At the age of four, Elize was sold to the Labari Institute for booster research by Isla of the Kitarl Clan. After Jiao became the leader of the Kitarl, the Labari Institute was dismantled due to infiltration by Exodus when Elize is 12. He then took her to Hamil, where he hoped she would be able to have a normal childhood. At the beginning of Tales of Xillia, Elize seems to have partial amnesia regarding her parents and Jiao, most likely in part due to her trauma at a young age.

Elize aids in the escape of Alvin, Jude Mathis, and Milla Maxwell the first time the party arrives at Hamil, and she later meets them again when they return. She is shown being pelted by rocks by the villagers, and it is very clear that the people of Hamil are not fond of her being there. However, Jude helps her, and she runs off to a house in the back of the village, where Jude has a talk with her and becomes her first friend. He soon convinces the rest of the party to allow her to come along, and thus she leaves Hamil with her new friends, joining the party initially as a non-playable character.

The party passes through Sapstrath Deepwood on their way to Sharilton, where Elize joins the party by demonstrating that she can heal them with her artes. On their way out of the forest, they come across Jiao, who is trying to bring Elize back to the village of Hamil, and he reveals that he has known her since before she came to Hamil. Elize shows that she is afraid of returning with him, and the party resolves to protect her, resulting in a fight against Jiao. Afterward, everyone escapes the forest safely and heads into Sharilton, where they meet Driselle Sharil, one of the Sharil siblings, and Elize befriends her quickly.

Over the course of her adventure, she would end up as a guest of House Driselle after the events of Fort Granal. After a while, she, along with Rowen, decided to visit Jude and Milla as Milla was working on getting her strength back and resumed their adventures together.

They eventually come upon the city of Xian Du, where Elize's life would take a drastic turn during the events of the story. Exodus was attempting to capture her and Teepo and managed this by making the party believe that they were trying to kill Milla. In the end, their plan succeeds and they are taken to a hidden labratory at the Royal Hunting Grounds. There, Elize watches in horror as Exodus takes the data memory from Teepo, causing him to revert to what would be considered his factory default settings. In addition to this, she had learned that she was sold off to Exodus as a test subject for their booster projects after her parents were killed a bandit and that Teepo was just a 'toy' that only repeated the deeper thoughts of Elize's conscious. She would be distant to all until she insulted the group and ran off where she ran into Jiao once again. It was after meeting him again and talking with her that she was finally able to accept her friends and move on with her life.

During the war between Rashugal and Au Joul, Elize meets with Jiao during his final moments after the Lance of Kresniak is fired and destroys part of the schism. It is then that she learns that the bandit who killed her parents and changed her life forever was him. His death would torment her for a while, not knowing why Jiao cared for her after everything that had happened.

Elize wears a dress similar to a Lolita, consisting of pink, violet, and purple colors. It was given to her by Jiao when they arrived in Hamil. She has two purple ribbons wrapped around her arms, and the boots she wears consist of an intricate design. She has green eyes and light blond hair that varies in shade; in-game, its color appears slightly different than what is depicted in her official artwork.

Elize is very quiet and shy due to the eerie and strange environment in which she was raised. She carries a purple doll named Teepo, who does most of the talking for her. Although she dislikes the company of most people, she does harbor a crush on Jude, who rescues her from the persecution she suffered in her hometown. In fact, she states that Jude was her very first best friend. As the story proceeds, she gradually opens up and forms strong relationships with the party members, particularly Alvin. At the end of the game, Elize seals Teepo's power, placing the doll in a chest, which marks the beginning of her emotional independence.

In Tales of Xillia 2, Elize and Teepo are a team again, but Elize goes to school and has many other friends. She is much more talkative, girly, and seems to have matured a little. She complains in a skit that their adventure lacks romance, surprising Alvin because he considers her too young to think such things. She has a pen pal named "Luna", who she frequently texts on her GHS as part of school requirements. Elize lives under the care of Lady Driselle and under the tutelage of Rowen J. Ilbert. She still looks up to Jude and eventually sees Ludger Kresnik in the same way. She sees Milla as an older sister and wants to be like an older sister to Elle. According to Chancellor Marcia, Elize is an idealist with an innocent heart who can share her perspective with "jaded" adults. Rowen also has confidence that Elize can help bridge the gap between the people of Auj Oule and Rashugal and entrusts her with the task of aiding Lady Driselle to the very end.

Elize wields wands in battle and specializes in healing and dark spirit magic. Her primary stat for her Lilium Orb is Mind, which affords her the highest magical defense of the party. Elize, with the aid of Teepo, can perform both melee attacks and spirit magic. Elize's characteristic skill is "Teepo Switching" (スイッチングティポ?, "Switching Tipo"), which has two modes: "Teepo On" and "Teepo Off". With the exception of Pow Hammer, all of Elize's martial artes utilize Teepo in their execution. All of her offensive spirit artes are Dark-elemental, while most of her healing and support spirit artes affect an area with the exclusion of Recover, Resurrection, and Revive. In Tales of Xillia 2, when Elize performs an offensive spirit arte in midair it becomes Shock Sphere, a trait she shares with Muzét.

During "Teepo On", Teepo rides on her back, enabling ranged attacks from her staff and increasing the strength of her spirit artes, giving various bonus effects and reducing casting time. During "Teepo Off", Teepo hovers around her, enabling enhanced melee attacks, which are delivered through him. In addition, Elize's running speed is faster when Teepo is off, allowing her to quickly put distance between herself and enemies. Elize's partner characteristic support skill is "Teepo Drain" (ティポドレイン, Teepodorein?, "Tipo Drain"). While she is the secondary partner, Teepo will intermittently drain some of the energy out of the targeted enemy, converting it into a small amount of HP and TP for her and the primary partner. Elize is best utilized against Technical-type enemies who focus on using artes, serving as an interrupter so that her allies can focus more on chaining attacks.

Elize's first mystic arte, Scary-Go-Round, is activated by using the arcane arte, Ignite Terror, during Over Limit. Elize gains a second mystic arte in Tales of Xillia 2, Infernal Crescendo, which is performed with Ludger. 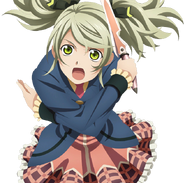 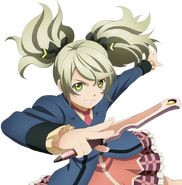