Estelle first encounters Yuri Lowell as they are both attempting to escape from the castle. She enlists his aid in her search for Flynn Scifo. Along the way, Yuri gives her the nickname "Estelle". After reuniting with Flynn, she decides to continue traveling with Yuri in order to broaden her horizons. During their journey it is revealed that Estelle is both a princess and a leading candidate to succeed the throne. Unbeknownst to her, she also possesses the power of the Child of the Full Moon, which grants her the ability to use healing artes without a blastia, drawing her powers directly from the world's aer.

After hearing about the threat of the Child of the Full Moon by the elder in Myorzo, Estelle leaves the group with Raven following after her. She is later caught by Alexei Dinoia and used as a weapon against her friends and was taken to Zaphias. After a failed rescue attempt, she fell into despair and her power took control over her. Under her trance, she fought against her friends and pleaded them to kill her. Mid-fight, Alexei used her power to resurface Zaude before giving Estelle the final order to kill her friends. With that Zaude teleported away. However, thanks to some encouragement by Yuri, she was able to come back to her senses, but not before her power went out of control without Alexei controlling it. The others then pulled their strength together and brought Estelle back.

To attempt to combat the massive drain on aer her powers cause, Rita Mordio sought ways to provide her a different power source. Initially she utilizes Estelle's own life force, based on a method utilized by Alexei to resurrect several soldiers from the Great War to serve as personal agents, using blastia to sustain them. Rita later successfully perfected a formula for the conversion of aer into mana, which would become the source for Estelle's powers for the rest of the story.

A sidequest in the game revolving around the Tree of Halure reveals that Estelle had chosen to live in Halure and write children's stories after her journey was over. In the end credits, Estelle can be seen reading to children, as well as finishing and closing a book she had written herself. In addition to her skill with stories, Estelle is skilled at naming things based off the things she has read. Throughout the game, she named Karol Capel's guild Brave Vesperia, the elemental Spirits, and the town of Aurnion.

Estelle has short pink hair and green eyes. Her outfit for most of the game consists of a white coat with gold designs, a pink dress underneath, white gloves, black stockings and white boots with gold designs. At the beginning of the game when Yuri first meets her, she is seen wearing a bluish-green dress with long white sleeves and pink earrings. Her hair is also tied up in a braid initially, which she lets down when she dresses more casually.

Estelle is an 18-year-old noblewoman who has spent all of her life growing up in Zaphias Castle. Due to her restrictive upbringing, she has gained most of her worldly knowledge through books. As a result she has developed a love for reading, and can recite various passages from heart. Proficient in healing artes, she was also trained in swordsmanship by a famed Imperial knight, Drake Dropwart. Despite her abundance of trivial knowledge, she has never left the castle and is sorely lacking in real-world experience. This becomes evident in her difficulty making critical decisions. Good-natured and selfless, she often puts others before herself. She uses her healing artes to help others whenever she can, and she is always kind to complete strangers.

Estelle wields swords, staves, and shields in battle. Estelle is a highly effective healer with both target-based and area-based healing and support artes. Unlike the typical cleric archetype, she possesses a high defense and a large amount of defense-related skills, and can hold her own in the front lines as an effective melee character with an emphasis on tanking enemies. She is also capable of using light-based magic, such as Holy Lance and Photon.

During the Lala Sidequest, Estelle is one of the nine dolls that can be given to the sick girl. She is made by dualizing Hubert Ozwell's Family Coat of Arms and a Stuffed Toy.

Estelle appears as a playable character in Tales of the World: Radiant Mythology 2. She and Yuri arrive on the Van Eltia after a certain amount of missions are completed. Estelle serves no actual purpose in the main story, but she can be recruited for missions. After Goede is finally defeated, she and Yuri are on the Van Eltia looking at the mana spreading across the world. Unlike Yuri, Estelle actually retains a good fraction of her artes from her original game.

Estelle reappears as a playable character in Tales of the World: Radiant Mythology 3 along with fellow Vesperia characters Yuri Lowell, Flynn Scifo, Rita Mordio, Raven and Judith. She is first seen being cornered by Saleh, where she is aided by Mint Adenade, Kor Meteor, Veigue Lungberg and the Protagonist. During the same scene, it is discovered that she was separated from her group, and that Yuri and Rita were looking for her. She has access to many more artes in her original move set than in Radiant Mythology 2. 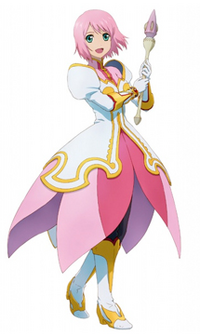 Estelle appears in the crossover RPG Project X Zone as Yuri's partner ally. Unlike Yuri, she can not be damaged by enemy attacks. Outside of battle, she can use healing magic such as Nurse to recover every active unit present, as well as Dispel to remove ailments. She retains Sacred Penance as her mystic arte and uses it during a map attack. At the end of Yuri's Savage Wolf Fury, she uses Holy Lance to finish the enemy.

Estelle appears in the sequel, this time as a solo unit. During Chapter 21, Yuri and Flynn arrive in Halure to find her completely dazed and in some sort of trance. After the rest of the characters exit the inn and find the two of them dealing with Sega mascot Segata Sanshiro, it is eventually learned that M. Bison from the Street Fighter series has taken control of Estelle using his Psycho Power in much the same way Alexei did in Tales of Vesperia. The party has to defeat Estelle in battle to snap her out of it; once she is KO'd, Shtrom, Shtrom Jr. and Druk from Captain Commando arrive in Halure and have their men abduct her, taking her away to Tarqaron. The party heads off to rescue her following the conclusion of the chapter. In Chapter 22, the party must prevent Estelle from reaching M. Bison or a game over will occur. Yuri and Flynn must be the unit to KO her this time, and she will immediately join the team following her defeat. 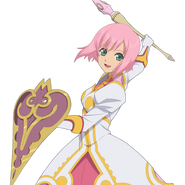 Cut-in image for Tales of the Rays, spirit gear attire.

Cut-in image for Tales of Crestoria.