View source
watch 01:54
Arcane: League of Legends - The Loop
Do you like this video?
Play Sound

Evelyn (イーヴリン, Iivurin?) is a protagonist in Tales of Breaker.

Evelyn makes no secrets about her work as a Jenes Migrate hunter, and serves as an informant to her clients. Beautiful and mysterious, she takes an interest in Mika and Yuteki when she learns the two of them are heavily involved with a specific kind of Jenes Migrate they are seeking and agrees to help them in their search.

Evelyn fights using a two-handed sword. This heavy weapon makes her slower than Mika in delivering combos, but she inflicts more damage with each individual swing and can resist damage to a higher degree due to a greater defense parameter. She is similar to Mary Argent from Tales of Destiny and other tanks such as Presea Combatir from Tales of Symphonia and Eugene Gallardo from Tales of Rebirth. What sets her apart from typical tanks in the Tales series is that she has access to magic, and the only spell she wields is an unusual choice: Indignation. 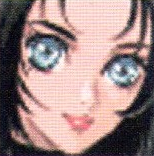