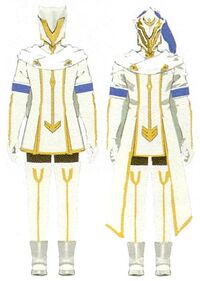 An exorcist (対魔士, taimashi?, "anti-demonist") is religious soldier of the Abbey in Tales of Berseria. They fight daemons and seek a way to eliminate them completely.

People who have strong enough resonance and purity of heart become exorcists, who defeat daemons, effectively quelling the malevolence they contain. Exorcists also seek Innominat the Suppressor, with whose help, they have the potential to stop the rise of daemons by using the Empyrean's power to suppress humans' emotions, effectively halting the process of their hearts generating malevolence, though this latter part is known only by high-ranking exorcists. Ranks are divided into three categories: orderly (二等, Niitou?, "Second Class"), praetor (一等, Iitou?, "First Class"), and legate (特等, Tokutou?, "Special Class"). Orderlies are the most common type of exorcists, there existing around 3,000 in number.

Praetor is a more exclusive class, comprised of around 100 members and varying in authoritative levels. For example, Eleanor Hume is a primus (テンナンバー, Ten'nanbaa?, "Ten Number")-rank praetor, while Oscar Dragonia and Teresa Linares are consul (ゼロナンバー, Zeronanbaa?, "Zero Number")-rank praetors, possessing a great deal of talent in both combat and leadership abilities. As a result, Oscar is often sent on high-profile assignments, while Teresa governs the city of Hellawes. The highest rank is legate, which only three individuals are recorded to have achieved: Shigure Rangetsu, Melchior Mayvin, and Artorius Collbrande, who serves as the leader of the Abbey and its exorcists during the events of the story. Magilou is later revealed as having been a legate around ten years prior to the story, but this identity is shrouded in mystery, leaving her to be known as the "lost legate".

Exorcists have existed for at least three-hundred years prior to the story. The top exorcists were Claudin Asgard, Melchior, and Artorius. As the exorcists where quelling daemons, the top-rank members were searching for the place where Innominat was sealed, but without success. Ten years prior to the story, during the Scarlet Night at Aball, due to Celica Crowe and her unborn child's sacrifice at the shrine on the village's outskirts, Artorius and Melchior discover that the shrine is a prison for Innominat. The incomplete ritual amplifies humans' resonance, resulting in them being able to see daemons and sealing most of malakhim's free will.

Seven years later, Artorius sacrifices Laphicet Crowe by his own request, and Innominat is resurrected, resulting in greatly amplifying humans' resonance and unlocking their ability to see malakhim. As some people had more resonance than others, they were more suitable in forming pacts with malakhim and, with their "help", fighting daemons. Artorius, who saved many people from daemon attacks on his way to Loegres following that Scarlet Night, earned a moniker of "savior". After speaking with the royal family of Midgand, revealing the truth about daemons, he formed the Abbey, whose main job was collecting eight types of malevolence to fully awaken Innominat so he could suppress humans' emotions under the guise of quelling daemons.