Fenia (フェニア?) is the Sacred Beast of Fire in Tales of Rebirth. She is a colorful, bird-like beast with the figure of a woman dressed in kimono-like attire.

Fenia is one of the six Sacred Beasts, known as the "Six Saints", who served the Sacred Beast King, Geyorkias, long before the events of the story. Each Sacred Beast possesses an arcane power, Fenia's being Fire. At some point in the past, the King and his Six Saints came into conflict over opposing ideals: Geyorkias believed they should eradicate all Huma from the world so that the racism and hatred between them and their fellow race, the Gajuma, would cease, as Huma had undergone a marked cultural development and waged war against the Gajuma in an attempt to subject them to the Huma's rule.

The group visits Fenia's shrine after journeying to the wasteland region of Calegia's eastern continent and performing the necessary ritual in Pipista to reveal her location. This ritual involves lighting the surrounding Flame-holders of Fenia's shrine in a fashion that mirrors a sacred altar in Pipista. The group lights the Flame-holders that represent wings and a heart, allowing Fenia's shrine to rise from the geoglyph etched in the sand and stretch into the sky. When the group approaches the shrine, Fenia's voice calls to them, calling her shrine a "Labyrinth of Wisdom" and stating that those who lack knowledge fear her power. Mao immediately recognizes Fenia's voice and recalls how the shrine appears familiar to him, making it evident that this is Mao's trial.

Throughout the shrine, Mao falls into the recesses of his mind, questioning his existence and citing his Force of Flame as a connection to the element of Fire that bore him. Mao then experiences a series of flashbacks, one being when Mao's Force went "berserk", causing him to storm Calegia Castle, and another one being when Eugene Gallardo named him after his founding and acceptance into the King's Shield under Eugene. In the naming flashback, Eugene explains to Mao how his name means "nothingness" in Ancient Calegian, representing a new beginning due to Mao's apparent amnesia. Mao's acceptance of his name is disrupted with Fenia's words, however, asking him if that truly is his name. Another flashback depicts Mao's creation by the Sacred Beasts, him being an experiment of theirs to see the world through a human's eyes. They tell him that he has no race, as well as that, while he is their creation, his heart is his own.

The Sacred Beasts' conversation regarding the dilemma with the races is also revealed in a flashback, and Mao's purpose as an attempt for the Sacred Beasts to better understand the human experience becomes more defined. Fenia speaks in this flashback, revealing how Mao's heart and eyes were formed from her body. At the top of the tower, in its final room, Fenia appears and introduces herself before making it to where only Mao can hear her. She explains to him that his true name is "Orselg", meaning "Untainted Eye" in Ancient Calegian, as well as that he was created by the Sacred Beasts for a distinct purpose. Fenia then asks Mao to define his existence, and his answer impresses her. She bestows upon him her power of Fire before granted the group a hint correlating with the location of the next Sacred Beast.

After the party defeats Yuris, the Sacred Beasts make the decision to leave the world in their hands. When Fenia bids Mao adieu, the latter acknowledges her as his mother before returning the farewell. 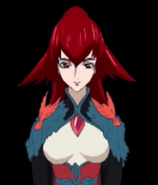