The Fighter (格闘家, Kakutouka?, "Fighting Expert") is a recurring job class in the Tales series. The Fighter specializes in fist-based attacks, originally sharing similarities to Farah Oersted before being firmly patterned after Senel Coolidge.

Fighters are recognized primarily by their ability to fight entirely with their fists, providing more control and freedom to their own movements during battle. Later games within the series started to include throwing moves for the class. The weapons they use consist of bracers and knuckles that strap onto their hands. Although they fight without weapons, Monks can deal just as much damage in battle as any other physical class, sacrificing the striking range of a sword or spear for more speed. Fighters wear light clothing consisting of robes and hats, and they cannot equip heavy armor. Standard artes usually associated with the Fighter job include Demon Fist, Swallow Dance, and Ground Slam.

In the original Tales of Phantasia: Narikiri Dungeon, the Fighter costume serves as the root of a whole family of costumes, available to both Dio and Mel. These costumes are styled after half of Cress Albane's fighting style, focusing on his physical attacks which do not require a sword, such as Shishisenkou and Hououtenku, in addition to his self-supportive abilities such as Goushourai and Shuukihou.

The costumes of this family are:

The first three costumes of this family can be used by both Dio and Mel, but the final Sumo Wrestler costume is exclusive to Dio. The Fighter also serves as the basis for two further evolutions, combining the fist-fighting prowess with lightning magic in the Thunder Fighter (かみなりとうし 「雷闘士」, Kaminari Toushi?) and with healing magic in the Monk (しゅうどうそう 「修道僧」, Shuudousou?).

In Tales of Phantasia: Narikiri Dungeon X, the Fighter archetype is split into two separate branches, each based on fist-based punches and foot-based kicks. Unlike more recent games which differentiate between the fighting styles of the Fighter and Monk classes, the features of the Monk class are predominant in all Fighter costumes of this game. While the original game features a single costume within the family which is exclusive to Dio, all costumes in the Fighter archetype are now available only to Mel, and Dio has no costumes of this type. The "Punch" variant costumes introduce several new artes while reprising the fist version of Rengadan and the more recent grab attack Reppashou. The "Kick" variant costumes are more reminiscent to the fighting style of Regal Bryant, featuring several attacks from his repertoire. The costumes of both branches are:

The "Fighter" set is a series of costumes for Julio Sven and Caro Orange in Tales of the World: Narikiri Dungeon 2. Bruiser Khang and Farah's costumes are based on the "Fighter", and Celsius's is based on the Water-elemental "Snow Fighter". A costume of any element can be merged with a Black Belt (くろおび, Kuro Obi?) root item to get a Fighter costume of the same element. All Fighter costumes have the unique passive skill Iwakowashi (?, "Rock Breaking"), which enables the wearer to destroy any boulder that blocks the path in a dungeon or mine for ore to be used for costume synthesis. This function is identical to the "Pickaxe" item, but unlike the item, this skill can be used at any time outside of battle with no cost.

In Tales of the World: Narikiri Dungeon 3, the costume system of the previous game was streamlined and simplified, leaving only the Fighter costume. Caro begins with her Fighter costume, but Julio must combine his Mimic costume with the root Black Belt (くろおび, Kuro Obi?) to obtain his own. The Fighter costume retains its ability to smash boulders. Bruiser and Farah have their costumes based off of the Fighter.

The Fighter is one of the five classes that are available to all players in Tales of Eternia Online. This class specializes in speed and burst damage, with some capacity for combos and limited healing artes. The Fighter relies on evasion to mitigate and avoid damage, but due to the inherently low defenses and high damage output of this class, characters must rely on other classes to draw enemy aggression. The abilities of this class are based directly on the moveset of Farah Oersted, and the combo chaining progression follows the pattern that Farah introduced into the series in Tales of Eternia. Farah also lends her sprite style and animations to female characters of this class.

The Fighter is one of the advanced jobs of Tales of the World: Radiant Mythology, gained after joining Ad Libitum and having the job system explained to the Protagonist by Kratos Aurion. This game marks the first time that the Fighter is patterned off Senel, who is himself a Fighter.

The Fighter class returns in the second installment of the Radiant Mythology games. The player can choose to become a Fighter at the beginning of the game, during character creation. The Fighter job continues to be based off of Senel with its focus on knockdown attacks and throwing abilities, both capable of providing a large amount of burst damage in few hits. A stronger variant of the job, known as the Monk, is a job which returns the focus of the unarmed fighting style to combo chaining, with the added bonus of healing abilities. This job, like the Fighter job of the past, is based on Farah. It can be obtained by leveling both Fighter and Priest to level 15 and spending 200 GP. 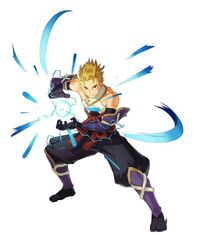 The Fighter job reappears in Tales of the World: Radiant Mythology 3. Like the previous game, the player can choose to become a Fighter at the beginning of the game during character creation. The Fighter job retains most of the artes from the previous games. The Monk job also makes a reappearance in this game. The job still focuses on the unarmed fighting style and healing abilities used by Farah Oersted. The job can be unlocked by having the Fighter and Priest jobs at level 30.