Flynn Scifo (フレン・シーフォ, Furen Shiifo?) is a major character in Tales of Vesperia. Somewhat of an anti-hero toward the beginning of the story, he greatly develops into one of the protagonists, frequently assisting the party in their endeavors. Flynn is Yuri Lowell's rival and best friend. He is a part of the Imperial Knights and, unlike Yuri, wishes to change the Empire from the inside. In the Xbox 360 version of the game, Flynn is a guest character participating in a single fight, but he is promoted to fully playable in the PlayStation 3 port and Definitive Edition.

In the prequel movie, Tales of Vesperia: The First Strike, Flynn is revealed to be the son of a late knight named Finath Scifo. Flynn dislikes talking about him because his father disobeyed orders, resulting in his death. Because of that, Flynn believes that Finath died leaving nothing behind. During this time, he and Yuri are part of the Niren Brigade, led by Captain Niren Fedrok, alongside twins Hisca Aiheap and Chastel Aiheap. Noticing a disturbance in the aer in a nearby area, Niren and his brigade investigate. While Flynn is against the notion because he did not want to repeat the same mistake his father made, he follows orders. During the mission, their captain dies and instructs Yuri to tell Flynn a little secret. By obeying orders, Niren lost his wife and daughter to an attack, and Finath died to protect the people. But during Niren's funeral, Flynn and Yuri discover that Garista Luodur's experiments for creating new blastia have been responsible for the recent chain of events. In response, the two fight Garista, using Niren's blastia to deliver the killing blow. After reporting Garista's death caused by an explosion that happened during the fight, Yuri leaves the knights with Repede.

Flynn, in contrast to Yuri, is a knight who would solve the larger problem before the smaller ones. He has a similar sense of justice to Yuri, but would rather solve them through politics, although he is shown to be frustrated by them—particularly when innocents suffer because of it. His differences in ideology causes him to frequently clash with Yuri, although the two are not really at odds with each other. This is best represented in the fact that Flynn chooses to work in the Empire, whereas Yuri chooses to work in the guilds. Flynn understands that there are those in power who would abuse it whenever they can and seeks to change the system for good by climbing the ranks until he can create a new set of laws that treat people with equality.

Flynn uses a sword and shield in battle. His arteset is closely similar to that of the Magic Knight, the only difference having more physical artes than spells. Throughout the Xbox 360 version of the game, Flynn only fights during two battles, one alongside Yuri and Repede, and the other in a duel with Yuri. At that point, he has a limited amount of artes at his disposal. His mystic arte is Radiant Dragon Fang, which is only available in the latter battle. As he is promoted to a fully playable fighter in the PlayStation 3 and Definitive Edition versions of the game, his arteset is expanded to give him more flexibility in combat than his X360 incarnation, and a second mystic arte called Firebird Flight, as well as a dual mystic arte with Yuri, known as Twin Wave.

Tales of The World: Radiant Mythology 3

In Tales of the World: Radiant Mythology 3 , Flynn is the commandant of knights in Garbanzo Kingdom and Asbel Lhant's superior. Upon hearing that Estelle, the princess, has left the kingdom with his best friend Yuri to join Ad Libitum, he sends Asbel to the guild, commanding that he should not come back without her. Later, when he learns about Estelle's refusal to return, he decides to visit Ad Libitum in person. There, he finally gives in to her insistence, settling down as a member in the guild to protect her, which is his highest priority. Later in the story, in regard to Yuri's way of accomplishing justice, Flynn suggests a duel with him to settle their problems. After the duel, he acknowledges Yuri's deeds and abandons his initial objective to persuade him into joining the knights. Flynn occasionally cooks in the guild, resulting in disastrous consequences.

Tales of The Heroes: Twin Brave

Flynn is the partner of the protagonist of a serious story, Yuri Lowell. As a knight in his country, Flynn sets out to investigate an issue involving an officer's oppression on some villagers with his best friend Yuri. They arrest the officer and free the villagers that were taken hostage, and learn that the officer has been recruiting a private corps to retrieve the Eternal Sword in some guarded ruins, attempting to gain the power to travel through time. The two decide that no ordinary person is supposed to obtain such a sword, let alone someone like him.

Later, Flynn learns that the officer who was released without charge has been assassinated by none other than Yuri. He chases after him, now a criminal at large, out of his duty as a knight, but his resolution sways when he hears Yuri's motives for committing the murder and his intention to destroy the Eternal Sword. He finally decides to help Yuri fight his way into the ruins, putting himself in conflict with some other knights. In the ruins, they defeat Elrane and destroy the Eternal Sword together. After the battle, Flynn insists that they have a fight with each other to settle the problems between them, and he wins in the end, meanwhile showing his determination to change the law for the sake of a better country to Yuri. Yuri admits his defeat and hands himself over to Flynn, ready to receive his punishment. Flynn states that though Yuri may be a criminal, he still respects him as a friend.

Flynn is also the protagonist of a comical scenario with Yuri being his partner. Feeling the necessity to correct the misbehavior of some other Tales characters, he takes Yuri along with him while carrying out his mission in a fervent fashion. He fails, though, given the misbehavior of Yuri's own that lose him his own credibility. Exasperated, he fights with Yuri, only to find out that his friend would never change himself for anybody else's sake. In the end, he admits that he should not have brought Yuri along in the first place. 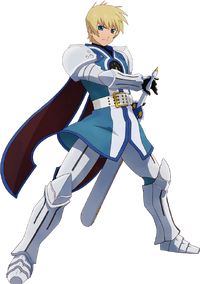 Flynn appears in the crossover roleplaying game, Project X Zone, alongside Yuri and Estelle. His actual introduction stage is after Yuri and Estelle's, where he is conversing with Princess Devilotte from Cyberbots in the world of Valkyria Chronicles. Devilotte demands that Flynn protect her after he introduces himself to her as part of the Imperial Knights, and offers to make him into an "enhanced fighting monster" as thanks, much to Flynn's bewilderment. Yuri, Estelle, and the rest of the X Zone team show up shortly after to help them. Flynn functions as a support unit in the game and can be called upon at any time to inflict additional damage and increase combos. While he can be appropriately paired with his fellow Vesperia allies, Flynn can be set as any pair unit's ally. With Flynn as a support unit, the current music may change to play Fury Sparks during the pair unit's active turn. In addition, his special skill, Marching Orders, boosts every unit's movement range by two spaces. In the sequel, he became fully playable as a pair unit alongside Yuri.

Flynn appears as a nexus recruited by Mercuria. At some point he agreed to become a prototype for the Asgard Empire's Living Doll Project, resulting in his body being possessed by the Bifrost soldier, Baldo. As a prototype, Flynn still retains his heart core and consciousness which allows him to communicate with his new host. Since Living Dolls also require some compatibility with their new hosts, Baldo shares Flynn's ideas on justice and views the Empire's actions as immoral. Both attempt to convince their superiors to abandon their ambitions but repeated failures make them resort to sabotage and allying themselves with Mileena's group.

As part of the plan to rescue Ix from his mirrage prison, Baldo transfers himself to Phantom's body while Flynn impersonates him to serve as a mole in Asgard. When the party launches a diversion attack on the Empire's capital, Flynn attempts to delay Mercuria and her team from leaving but fails. He then follows them through their teleportation circle to Sellund and reunites with the annoyed Yuri who berates him for his actions. The two quickly reconcile and rush to the Kaleidoscope just in time to assist Mileena fight off Nazar. Together they defeat the former prince and escape with the newly rescued Ix.

After returning to the party's hideout, Flynn joins them as a member of Brave Vesperia. However, the guild's preferred methods in getting jobs done usually do not align with his skill set so Karol frequently has him on standby. In the meantime, Flynn assists on other tasks and eventually volunteers himself to be the party's representative for the exoflected Terca Lumireis region, monitoring the Empire's activity within.

Cut-in image for Firebird Flight in the PlayStation 3 port and Definitive Edition of Tales of Vesperia. 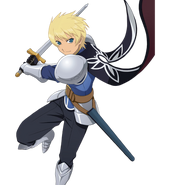 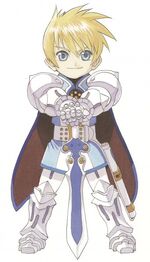