Aselia Wiki
Register
Don't have an account?
Sign In
Advertisement
in: Forest Ledoyen, Tales of the Tempest characters, Protagonists
English

Forest Ledoyen (フォレスト・レドワウヤン, Foresuto Redowauyan?) is one of the protagonists in Tales of the Tempest. He is the bodyguard of Tilkis Barone.

Forest is a Leymon who immigrated to the small country of Senshivia (センシビア, Senshibia?) following a disastrous event at the capital city of Janna, where and his Leymon comrades were met with hostility despite their attempt to negotiate with humans. He joins Caius Qualls in his quest to help save the country from danger and knows a lot about the geography of the world, so he serves as a traveling guide. He may seem intimidating due to his stature, but is a kind person. During the story, he returns to his home village of Sansa after 14 years away.

Forest is a well-built man with dark skin and graying hair that trails down into a small beard. He dons a gold chainmail and white vest with a large collar. His hands are shielded by large gloves, and he wields a large axe in battle. Despite his intimidating appearance, Forest is a gentle person with a haunted past that presses him to go on his journey with Tilkis, and ultimately Caius and the others. He wields a vast knowledge of Areulla and its history, which serves the group in many helpful ways throughout their journey.

Human status image in Tales of the Tempest.

Leymon status image in Tales of the Tempest. 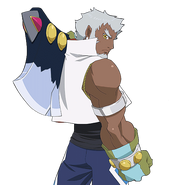