The path deeper into the Morlia Mineshaft is guarded by Maxwell. To call him forth, one must summon the Four Great Spirits in the required locations. Claus F. Lester does so to advance further into the Mineshaft so he can obtain the pact ring needed to form a contract with Luna.

The Four Great Spirits are well known in Rieze Maxia. Twenty years prior to the start of Tales of Xillia, artes invoking the Four stopped working because they were reserved for the personal use of Milla Maxwell, who was raised by the Four to believe she was the human incarnation of Maxwell on the orders of the real Maxwell. Milla depends on the Four to grant her skill and power; when their links to her are broken by the Lance of Kresnik, she is forced to relearn everything from scratch.

Milla is reunited with the Four in the Spirit Realm after her sacrifice in the E.S.S. Zenethra. They intervene in the cycle of reincarnation due to how close they became in the last twenty years. The Milla that they rescue is nothing but a shell at this point, lacking both personality and memories. The Four Great Spirits know that their lives are now forfeit because they have disobeyed the true Maxwell, so they decide to travel with Milla. The Four Great Spirits eventually give themselves up to reincarnated while telling Milla that she is now free to be anyone without being bound by the name "Milla Maxwell". Milla is unable to let them go and follows them to her shrine, and they eventually declare their allegiance to Milla as opposed to Maxwell. They continue to support her as she completes her mission to save the world and then truly ascends to the position of Maxwell.

In Tales of Xillia 2, the Four continue to serve Milla in her role as Maxwell. The fractured Milla no longer has control over the Four as her mission and role as decoy Maxwell was complete with the destruction of Exodus. In a fractured dimension, another version of Muzét usurped control of the Four from the local Milla and freely wields their power in battle. 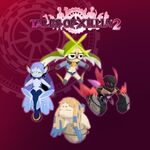