Garr Kelvin (ウッドロウ・ケルヴィン, Uddoroo Keruvin?, "Woodrow Kelvin") is one of the main characters of Tales of Destiny and a supporting character in its sequel, Tales of Destiny 2. Garr is the prince, and later king, of the snowy kingdom of Phandaria, and is the first playable ally Stahn Aileron meets. He is a master of both swordsmanship and archery and later gains several wind magics, augmented by his Swordian, Igtenos. He is also a kind, honorable man, very keen to his surroundings, and in possession of a logical mind.

Prince Garr Kelvin is the son of King Sark (国王イザーク?) of Phandaria. Although a prince, he is often seen wandering outside the castle, disguised as a wanderer. He studies archery under master archer Alba Torn and becomes the subject of Alba's granddaughter Chelsea Torn's infatuation. As the prince of Phandaria, Garr is destined to one day wield Phandaria's family heirloom, the Swordian of Wind, Igtenos. Thus, as he becomes acquainted with the Swordian, Garr develops an ability to hear the words of a Swordian. One day, Garr rescues a young man named Stahn Aileron. While nursing him back to health, Garr discovered the presence of a Swordian on Stahn's possession, Dymlos. He keeps his awareness a secret to Stahn. When Alba tells Garr to look after the missing Chelsea, Stahn accompanies him, and after returning Chelsea, Garr escorts Stahn to the border city of Janos and leaves him, heading back home to visit his father. 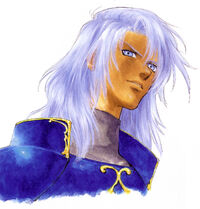 Garr will not meet Stahn again for a long time, until High Priest Lydon Bernhardt suddenly arrives at Phandaria and quickly seizes control of the Kingdom, killing Sark and taking possession of Igtenos. Garr escapes captivity and is being chased by his pursuers when he finally collapses and is shortly after saved by Stahn. After introducing himself to Stahn's new companions, Rutee Katrea, Philia Felice, Leon Magnus, and Mary Argent, Garr conducts a plan to retake the capital of Phandaria, Heidelberg. Upon reaching Heidelberg, however, Mary is reunited with her husband, Dalis, who was brainwashed by Lydon. The soldiers attempts to capture the group, and although Garr escapes once again, Stahn, Rutee, and Mary are captured. Thanks to Leon's device, Garr tracks Stahn and Rutee to the prison and bails them out.

They successfully retrieved Mary as well, and depending on the circumstances, Dalis may die or survive. Regardless, Mary becomes unavailable for further battles for a large section of the game. Garr joins Stahn and the others in the final showdown against Lydon, in which they prevail. However, the Eye of Atamoni begins to run berserk. Thanks to Leon's device, it calms down, although in reality, the device also puts the Swordians in dormant state for his future plot. However, because of Lydon's misuse, Igtenos is fully deactivated. With Lydon dead, Phandaria is free. Garr travels to Seinegald with Stahn to deliver the news to the King. As he is the prince, Garr immediately takes responsibility as the new king of Phandaria and has the king of Seinegald enter an alliance with his kingdom as a proof that the Eye of Atamoni will not be misused anymore. As Stahn is about to leave, Garr promises to take care of Mary, as she originated from Phandaria as well. Garr eventually returns to his kingdom where he claims the throne and rules his kingdom wisely.

Phandaria prospers under Garr's rule and it seems that there is nothing that will disturb the peace. However, he is soon visited by Stahn, Philia, and Rutee, who tell him that the Eye of Atamoni is once again missing. Garr decides to investigate this matter as well, also telling Chelsea, who has been staying in the castle, to stay behind. They head to Seinegald with Garr carrying Igtenos, hoping that he will find a way to wake him from his slumber.

It is revealed that the Eye of Atamoni was stolen by Hugo Gilchrist, president of Oberon Corporation, with Leon's help. Tracking them in the secret Oberon laboratory, Garr and his friends are forced to battle Leon, although Garr knows that Hugo was just using Leon all along. Before the fight, Leon reveals that Rutee is his sister and Hugo is their father, while Garr tries to stop her from arguing with the younger warrior. In the end, the heated battle causes their battleground, the mines, to flood. Leon is too wounded to move on and is swallowed by the rapids, killing him. In instant after the party's escape, the floating continent of Aethersphere rises from the ground.

The party ventures through the floating continent to stop Hugo. In Helraios, after defeating Ilene Rembrandt, Garr utilizes the technology there in order to revive Igtenos. The effort is a success, and Garr is now ready to fight alongside his Swordian in battle. Reaching Belcrant, the party succeeds defeating Hugo, only to discover that he was being controlled by the spirit of Kronos who escaped into the dead Swordian Berselius during the Aeth'er Wars. Kronos resurfaces and quickly decimates the party, sending them back to the lower continent. Despite that, the party resolves to defeat Kronos. They make their way back to Aethersphere and confront Kronos in Dycroft. Upon Kronos's death, the Eye of Atamoni goes berserk again, and the only way to stop it is to stab the Swordians into it, calming it at cost of the Swordians' existence. Garr is the first to let go of Igtenos, followed by the others. Eventually, the party escapes Dycroft successfully. After that day, the party decides to throw a reunion once in a year in Stahn's house in Lienea.

Garr once again resumes his position as the king of Phandaria in the sequel, and is also aware of Stahn's untimely death under an assassin. He has been collecting Lens in order to make his people prosper. Eventually, he receives a visit by a holy woman called Elrane, who gains popularity by making miracles. She is requesting that Garr donates his Lens for his people to achieve true happiness. Garr considers it, but when she leaves, he receives another group of visitors led by Kyle Dunamis, son of Stahn and Rutee. Kyle is looking for a hero that his companion Reala is looking for, but it turns out that Garr is not the said hero. After talking and giving both advice and good luck, Garr sends them to rest. However, he is unaware that one of Kyle's companion, Judas, is actually the same Leon Magnus who betrayed them in the past, brought back from the dead.

Shortly after, the airship Draconis crashes to the castle and in the midst of chaos, Barbatos Goetia confronts Garr and heavily wounds him. When Garr recovers consciousness, he finds out that his Lens were stolen, which put him to depression, fearing that he will not be able to make his people happy. Later, Kyle requested a decree from him to enter the old Earth Army Base. Garr learns the situation quickly and grants him the decree. When Kyle visits him again, he asks Garr about a heavy decision: to choose between the world or his beloved. Garr's advice is to keep thinking until the time comes. Eventually, Kyle and the group defeats Barbatos, Elrane, and eventually Fortuna. With their defeat, the history is fixed and events involving Elrane is annulled, which includes Stahn's death. As for Garr, his Lens is never stolen and he continues to rule Phandaria wisely.

Garr fights with a sword and a bow, capable of switching between the two very quickly. Having been taught by Alba alongside Chelsea on the latter weapon, he shares various archery artes with her. Where the similarities end, Garr can use Wind-elemental spells early on before forming the Swordian pact with Igtenos. In the PS2 version of the game, he gains three Blast Calibers, Resshou Souhajin, after claiming Igtenos, Koubu Senkousen, available in the Swordian pact, and the self-instant-killing Sekkazan. 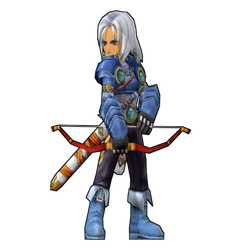 Garr appears in Tales of Symphonia as one of the enemies during the last Meltokio Coliseum team battle, along with Farah Oersted and Meredy from Tales of Eternia.

Garr appears as the guild master of Doplund's Ad Libitum. As Mormo and Lloyd Irving state, he is gentler than Kratos Aurion, and is always thinking about the others before himself. Because he is of royal blood, he feels it is his responsible to help the poor in town, showing this when he tries to help Nanaly Fletcher's money problem. He is also quite popular with the girls, but seems to have no idea of it. 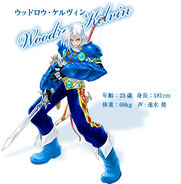 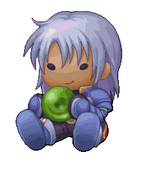