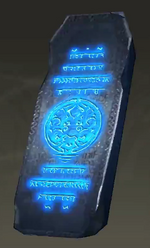 The geoboard (レアボード, reaoodo?, "rheaboard") is device in Tales of Berseria that functions as a land-based version of the Rheairds from Tales of Phantasia and Tales of Symphonia.

In the story, a Katz digs the geoboard out of some ruins and presents it to the group as they leave the village of Stonebury. Created by the normin for surfing along earthpulses, the board activates when a normin says their normin name. Bienfu mentions that it was made by accident as he proceeds to offer his normin name in order to activate it. The board propels itself by "pushing" against earthpulse flows, as the Katz describes it, and that a geotree must be discovered in a particular area in order for the board to operate there. The geoboard offers faster movement in towns, dungeons, and fields; in the latter two, it is capable of eliminating weak enemies in the user's path, though neither Gald nor experience is obtained from doing so.

v • e • d
Lore for Tales of Zestiria and Berseria
Retrieved from "https://aselia.fandom.com/wiki/Geoboard?oldid=206869"
Community content is available under CC-BY-SA unless otherwise noted.