Gilione (ギリオーヌ, Girioonu?) is the Sacred Beast of Light in Tales of Rebirth. She is a colorful, kirin-like beast with four wings and two wing-like flames rising from her sides.

Gilione is one of the six Sacred Beasts, known as the "Six Saints", who served the Sacred Beast King, Geyorkias, long before the events of the story. Each Sacred Beast possesses an arcane power, Gilione's being Light. At some point in the past, the King and his Six Saints came into conflict over opposing ideals: Geyorkias believed they should eradicate all Huma from the world so that the racism and hatred between them and their fellow race, the Gajuma, would cease, as Huma had undergone a marked cultural development and waged war against the Gajuma in an attempt to subject them to the Huma's rule.

The group ventures to Gilione's shrine after learning of its location from a woman in Mocrado Village who explained how Hilda Rhambling's mother, Naira, once prayed for Hilda's safety on a sacred island located at the base of the Alvan Mountains. When the group reaches the island, a shrine emerges from the ground before them, and Gilione's voice speaks directly to Hilda, stating that she has been to the shrine before with her parents. Gilione then introduces herself and asks why Hilda has come to see her, and Hilda answers that it is to obtain the power of the Sacred Beast.

Hilda explains how the power of the Sacred Beasts is necessary in order to purify the impression that currently threatens the world, and Gilione instructs Hilda to come before her if her words are without hesitation. When the group enters the shrine, Hilda's trial begins. Hilda hallucinates and experiences a flashback depicting her Gajuma mother, Naira, and Huma father, Amgil, entering the shrine with her when she was merely an infant. Another flashback reveals Naira and Amgil naming Hilda. As the group ventures further into the shrine, Hilda's flashbacks become more powerful, and she witnesses her younger self being treated like a monster due to her horns, a blatant symbol of her Half heritage. The following flashback depicts Hilda's parents struggling to care for Hilda in her fragile infant state, Halfs being prone to illness due to their frail bodies.

Knowing they cannot go to a doctor for help, Naira mentions "ruins filled with a mysterious power on an island" before the scene shifts to Naira and Amgil's trial inside the shrine. In the next flashback, a young Hilda is shown being trained by Tohma to exert her power on a man calling her a monster. The scene then shifts to Hilda's introduction into the King's Shield, with a soldier telling her not to look at him because of her race. Hilda screams and curses her horns as a result. The scene in which Hilda confronts the group at the Tel Alla Hostel then plays, and a phantom version of Hilda begins announcing Hilda's thoughts and emotions to her. In the final room of the shrine, Gilione appears and properly introduces herself before speaking with Hilda privately.

Gilione then presents Hilda with the body of a Huma and the body of a Gajuma, informing her that she may choose which body she wants. A number of phantoms surround Hilda, beckoning her with which body she should choose before Hilda claims that she has no need to change her body. Gilione questions this, but Hilda remains firm in her decision, citing her body as the product of her parents' love for her. Gilione then tests Hilda and the rest of the group in battle with a phantom version of Hilda. After the battle, Gilione deems Hilda worthy of her power and bestows upon her the power of Light. Gilione then instructs Eugene Gallardo to search for the "Island of Illusion" and confront the remaining Sacred Beast, Randgriz. 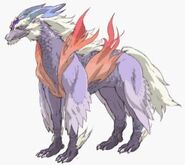 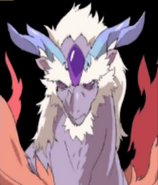