Gnome (ノーム, Noomu?) is the Spirit of Earth, also representing one of the four cardinal elements of the Tales games. Gnome has appeared in several games of the series as a character or cameo and can be summoned through the Gnome arte. Gnome is opposed by Sylph, the Spirit of Wind. In Tales of Rebirth, Gnome is replaced by Randgriz, the Sacred Beast of Earth.

Gnome appears as four, rocket-like protrusions from the ground. Found in the Cavern of Spirits, he is one of the first four Spirits that the party must face before they can meet Maxwell, the Spirit of Matter. Gnome is very territorial, attacking the party for invading his home. Gnome requires the "Ruby Ring" to forge a pact, granting Claus F. Lester with the power to summon him in battle with the Gnome arte. In battle, Gnome attacks by turning himself into missiles and launching into the air when an enemy gets close. This has the side effect of making him immune to all attacks while it is being performed.

In Tales of Phantasia: Narikiri Dungeon, Gnome is the Spirit of Earth and one of the twelve Spirits that must be fought during the Ordeal of Spirits. He is found on the last level of the Cave of Earth in AC. 4203 and is the boss of the dungeon. Upon defeat, he teaches Mel and Dio the heart of earth: Feeling of Gratitude (かんしゃのきもち, kansha no kimochi?).[1]

In Tales of the World: Summoner's Lineage, Fulein K. Lester can summon Gnome as a unit.

Gnome can be summoned through the consumable item "Gnome", which is described as an ancient weapon capable of calling forth the earth spirit. The Gnome sprites are visually similar to the Hobblin enemies from the 1983 arcade game Libble Rabble published by Namco.

Gnome is a cameo appearance in the mystic arte Earth Tapper.

Gnome represents one of the Greater Craymels and one of the Primary Craymels of Celestia. The Earth Craymel governs the use of all Earth-elemental spells. Found in Gnome's Village deep within the Mine of Gnome, he has grown lazy due to being pampered by his Gnome underlings. It takes all three of the Inferian Primary Craymels to convince him to act. Gnome himself can be summoned through the arte Gnome. During battle, Gnome attacks using a wide-variety of artes, mainly through the use of his snout, as well as having his underlings throw stones from the background at the party. 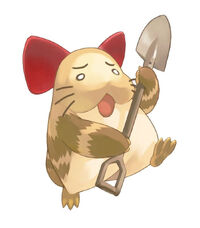 Gnome, the Servant of Mother Earth, appears in an a large, mole form complete with a shovel and red bow and is one of the Tethe'allan Summon Spirits. Appearing in the Temple of Earth, he is the Summon Spirit of Earth who is responsible for generating gravity on both Sylvarant and Tethe'alla. One of the more comical Summon Spirits, his face deftly reflects his emotions. He is also prone to commenting on RPG conventions, such as when he is beaten. Gnome can be summoned through the arte Summon: Earth. When fought, Gnome uses his shovel to attack enemies, as well as performing body slams. He also has access to Earth-elemental spells such as Stone Blast, Stalagmite, and Ground Dasher. He can cause the bow on his head to spin like a propeller, ducking down his head to cause damage. 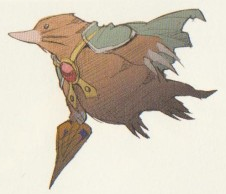 Gnome appears as a glowing ball of light only Grune can see, joining her after the party defeats Dark Moses Sandor and the Rabid Giet. He then rests in Grune's urn as a seed, at which point Grune plants it in the Quiet Lands. At the end of the story, Gnome is born from this seed as one of the Summon Spirits bequeathed onto the world.

Gnome is mentioned but does not appear in Tales of the Abyss. Here, he is the aggregate sentience of the Second Fonon, the Fonon of Earth. He is best-known as being believed to be the source of the miasma throughout a significant portion of the story, as they say the miasma is "seeping up from Gnome's domain". The seventh day of the Auldrant calendar, Gnomeday, as well as the fourth and ninth months, Gnome Decan and Gnome Redecan, are named after Gnome. 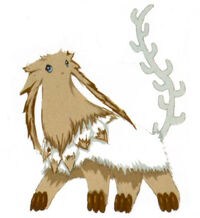 The Entelexeia Gusios threatens to turn into the Adephagos after consuming too much aer. In order to prevent this, the party is forced to kill him. By using the process of Spirit conversion on his apatheia, the party turns him into a Spirit, which Estelle names "Gnome", meaning "Spreader of Roots". Unfortunately, the insanity brought on by his brush with the Adephagos renders him unable to speak normally, though he has Sylph translate for him. In the PlayStation 3 port of the game, Gnome appears during Estelle's mystic arte Ultimate Elements. After Efreet burns the enemy, Gnome rises on a giant boulder, which then explodes.

In Tales of Crestoria, Gnome is the second spirit to be introduced in the Spirit Trials. Gnome retains his Xillia appearance, and gains his own mystic arte, Earthen Jaws. 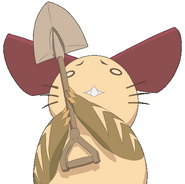 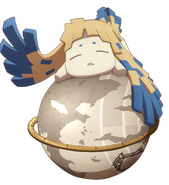