Grune (グリューネ, Guruune?) is a protagonist in Tales of Legendia.

In the past, Grune bound Schwartz at the Cradle of Time, using all her abilities to defeat Schwartz and losing her memory and powers as a goddess in the process.

The party first finds Grune in the Man Eating Ruins during the Main Quest when they are getting the "Whisper Crystal" for Maurits Welnes. They find her sleeping in a bed and manage to wake her up. She reveals to the party that she has no memory except for her name, after asking questions that she answered in a weird fashion, the party decides to take her with them. During the events of the war, Grune is seen getting supplies for the soldiers. After the victory over Vaclav Bolud and the death of Stella Telmes, Grune is seen at the flower field and meets with Harriet Campbell and Pippo. Grune looks out to the sea and tells the two that it seems upset.

Two weeks after the war, Grune decides to take residence at the Inn in Werites Beacon and takes the role as replacement for the Bantam Bouncer's second lead, after Isabella Robbins was called to do important duties for Rexalia. Ed Curtis tries to persuade Senel to make Grune quit, but Senel rejects the request. Senel and Harriet visit Grune again at the plaza and give her a medal from Gadoria for helping during the war. Grune sees that Senel is somewhat upset and decides to hug him, Grune hugs him and tells him he should feel all better after. Grune is not seen again till the end of the chapter, right after Shirley Fennes becomes the Merines at the Altar of the Sea. When Walter Delques is about to kill the party, Grune unknowingly uses the summon spirit Celsius to save them. When she arrives, she sees the party floating down from the ceiling and tells the party how fun it looked. After Grune is conversing with Celsius, who is invisible to the other characters and tells her to rest within her urn. She and the party are attacked after by the Automata and are forced to flee, due to the fact they lack their eres.

After fleeing from the Automata, Grune and the party head to Werites Beacon. When they arrive at Will Raynard's house, Senel passes out and Grune carries him to the inn. Once Senel awakens, she comments on how he and Chloe are acting; this causes Senel to realize what they really need to do in order to move forward. After they leave the inn, they are attacked by the Captain of the Gadorian Knights. Grune follows the party to the lighthouse and the Quiet Lands. After a long discussion, the party barely notices that Grune was with them. They realize they have no other choice but to take her, and she joins the party. After learning the truth, the Quiet Nerifes bestows sacred eres on to the party with a request. After these events, Grune heads to the Mirage Palace with the others, but fails to return Shirley to her senses. Grune and the party head to the Wings of Light and defeat the Raging Nerifes. Grune tells Norma Beatty the name of the planet they live on, Shining Blue. During the ending credits, Grune is seen holding Celsius's seed in the forest.

The Character Quest is more of Grune's story than anyone else's. It mainly involves Grune obtaining the Summon Spirits and regaining her memory. During the Character Quest, there will be moments where she will get her memory back, before completely forgetting about what she just remembered, causing the party to worry that she will forget about them someday as well. Once she slowly comes closer to realizing who she is, it is hinted that Grune is trying to make the others not worry by faking her cheerful personality whenever they ask if she is okay.

After being attacked by the woman in black at Mirage Palace, Grune is knocked out and rushed back to Werites Beacon. After she wakes up, she reveals to the party that the woman's name is Schwartz. Grune tells the party that she feels Schwartz is at the Bridge. The party goes to the Bridge and meets Schwartz at the final floor. When the party tries to get answers out of her, Schwartz summons negative energy to paralyze the party. Schwartz then reveals to the party that she is mist's source and plans to return the world to nothingness. She then tries to destroy Senel and his friends with the Black Mist, but she is stopped when the party uses their Sacred Eres to block the attack. Schwartz summons a dark version of Vaclav, but it is easy defeated by the party. After defeating "Dark Vaclav", they notice Schwartz managed to escape and they decide to head back to town.

During the middle of the night, Grune feels guilty for bringing Senel and his friends into her mess. She writes a letter to the party and tells them she is going to find Schwartz. At the Wings of Light, Grune meets up with Schwartz, but Schwartz attacks Grune and defeats her easily. When Senel and the others arrive at the Wings of Light, Schwartz paralyzes the party again. Grune cannot stand to see this anymore and manages to regain her memories. With her memories and power restored, Grune lifts Schwartz's hold on the party. Schwartz then attacks Grune and the party and battles them, but she cannot be defeated. Schwartz disappears and the party returns to town. After Grune and the others return to town, the Bouncers tell the party that Schwartz passed through Werites Beacon and headed to the Altar of the Sea. 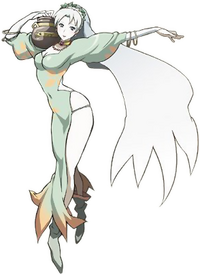 At Will's house, Grune reveals to the party that Schwartz's actions are to complete the wishes of Nerifes, to bring the people of the world at peace. Grune tells them that this can interpreted in others ways, which Schwartz views as spiral of death to everything is the only way to bring true peace. Grune tells the party not to interfere and tells them she will be the one to defeat Schwartz. The next day, when Grune is leaving town, the party arrives and force Grune to take them with her. Grune listens to their pleas and allows them to go with her. The leave town and decide to head to the Altar of the Sea to obtain Super Sacred Eres. After the party completes Nerifes test, they obtain Super Sacred Eres and find a way into the Cradle of Time.

In the Cradle of Time, Grune and the others are forced to face the enemies they defeated in the past and dark versions of Senel and Shirley. After the enemies are defeated the party finally arrives to Schwartz resting place. The party arrives to the final area of the cradle and Schwartz begins speak to the party on why they are they trying to save their world. The party begins to explain their reasons, but Schwartz views their reasons as non-sensible. Schwartz then attacks Grune and the party, after a long battle with Schwartz she suddenly stops. Schwartz tells the party that she will be the planet's savior and unleashes the Black Mist throughout the entire Legacy. She begins another attack which is planned to kill the party, but Grune attempts to block the blast with her power. The party begins using the Super Sacred Eres to help Grune and Schwartz's blast of power is destroyed; Schwartz then tells the party she will return the world to the Void. Grune and the party fight Schwartz in one final battle and she is defeated.

After defeating Schwartz, her mask is severed in half and falls to reveal that Schwartz is actually another incarnation of Grune. Schwartz begins to disappear and warns the party that she is born from the deeds of man and she will return. Schwartz disappears into a storm of black feathers and dies. As the cradle begins to fall, Grune takes a final look at the area and returns to the Altar of the Sea. After Grune returns to the Altar of the Sea, she begins to fade away. She reveals to the party with the defeat of Schwartz, she is unable to exist independently without her. Since the world is not all powerful, immature and even lacks Summon Spirits there is nothing that cannot stop Grune from disappearing. Grune begins to say goodbye to the party and reminds them to be happy. Before fading away she calls the Summon Spirits Celsius, Efreet, Shadow, Gnome, Volt, and Rem with the last of her power, saying that those children will carry on her power. Grune then awakens the spirits and thanks the party for the laughter and the memories during the time shared together. She reminds them that the future is now theirs, then disappears into a shroud of white feathers.

Grune has been termed both the bravest and the most clueless member of the party and appears to be quite comfortable carrying out whatever odd request Norma might have of her, all the while leaving unrequited the rather blatant crush harbored for her by Moses Sandor, of which she is most likely unaware at first and with which she is unconcerned at the end of the story. Until a certain point in her Character Quest, Grune speaks in a very cheerful, monotone voice and will often make airhead comments.

Grune also tends to do something without thinking and says the strangest things during battle. For instance, if she wins a battle, Grune would either apologize to the monsters or get her hand stuck in her urn. While she was discovered in the Man Eating Ruins during the party's first visit in the first part of the game, Grune does not become a playable character until the party reaches the Quiet Lands. Until then, she is mostly seen standing around and making rather unusual comments about the current situation. During the battle with Vaclav's army she said that the lights and fire made the place seem like a festival. Later, there is a scene where Grune will be found in the plaza with Curtis, and she even gets to sing a line during Curtis's second song number.

Due to Grune's constant smile and very dreamy personality, it is hard for any of the characters to get mad at her and to refuse her. She is admired by males for her appearance, and her easy-going self allows her to make friends easily. Grune also has no real romantic feelings for anyone, as she claimed herself that she loves everybody in a skit.

Grune fights with urns and vases in battle. Her urns can deal significant physical damage, though she is slow in attacking with them. Unlike the other playable Crystal Eren, Grune learns no healing or status-affecting crystal eres, and she focuses on offensive spells instead. She learns the widest array of Sea and Curse spells in the game, and she has the second-highest base intelligence stat in the game, but she has the second-fewest number of available eres overall. Grune is also the only Crystal Eren not to learn any novice-tier eres, and she has the lowest elemental versatility of all Crystal Eren. However, she is the only playable character to learn spells such as Brilliant Lance and Bloody Howling, among other powerful Sea- and Curse-elemental attacks. 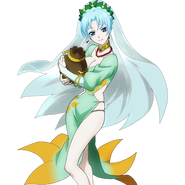 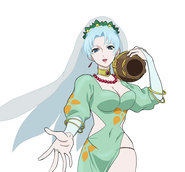 Cut-in image for Tales of the Rays.]]